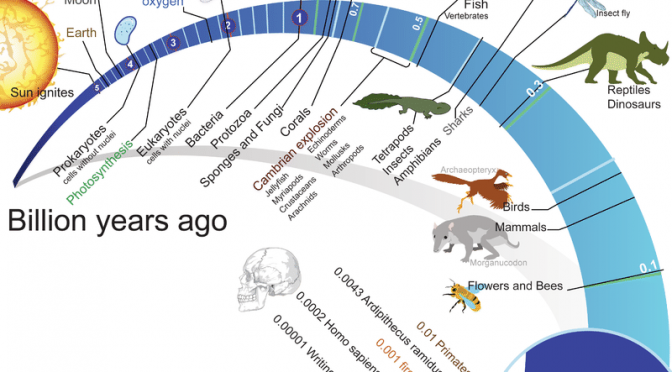 It was in these waters that the first complex chemicals collected, and started to interact simply due to basic chemical reactions fueled by energy from the sun, lightning in the early atmosphere, and heat from deep sea thermal vents (see Miller-Urey Experiments).  They combined,  later to break down again and reform, in a cycle that would create new compounds.  Amino acids, (which have now been found in space) landed on the earth to add to the mix and fuel new combinations.  After a while (~500 million to 1 billion years) there arose a string of amino acids that were able to replicate, i.e. make copies of themselves, from the pieces of molecules that were floating in the liquid environment.  These were the early RNA molecules.

For the first 2 Billion years, there was little or no oxygen on the Earth, however there was hydrogen, helium, methane, carbon-dioxide, ammonia, water vapor and the noble gas neon.  Single-celled plants then evolved which were able to use those abundant gases during photosynthesis which produced oxygen as a by-product (waste).

Billions and billions of these tiny plants, over the next billion years, were able to produce the great quantities of breathable oxygen which multi-celled animals eventually evolved to use.

So, in the beginning, Earth was lifeless for nearly a billion years, and then it was populated only by these single-celled organisms for nearly 3 billion more years before they started to combine into larger collections of cells that were able to work together to more efficiently compete for the available nutrients in the water. Some of these earliest multi-celled organisms were sponges and jellyfish.  They had no senses; no eyes, no sense of smell or hearing and only a rudimentary sense of touch; but they were able to capture and digest the single-celled creatures and plants that they happened to come into contact with.

Plants were the first life to spread to the areas around the bodies of water about 435 Million years ago. Fish use oxygen just like land animals do, they just get it from  the dissolved oxygen that is in the water.  But some fish, living in low-oxygen water environments evolved the ability to also get it from the air, and it wasn’t long before they were moving onto the land. The rest is history.

From fish, to amphibians and reptiles, to mammals to man.  The entire trip from sponges-to-man took only 500 million years. It’s amazing to think that dinosaurs roamed the earth for over 150 million of those years, but Man has only been around the last ~150 thousand years (originating in Africa, spreading to Europe and Asia, and then, only came to the America’s for the first time around 15,000 years ago!).

Compared to man dinosaurs were a VERY successful branch of evolution!  Heck some of them still survive in the birds that we see flying around today.  (Crocodiles and alligators have been around for more than 180 million years, making them living dinosaurs.)