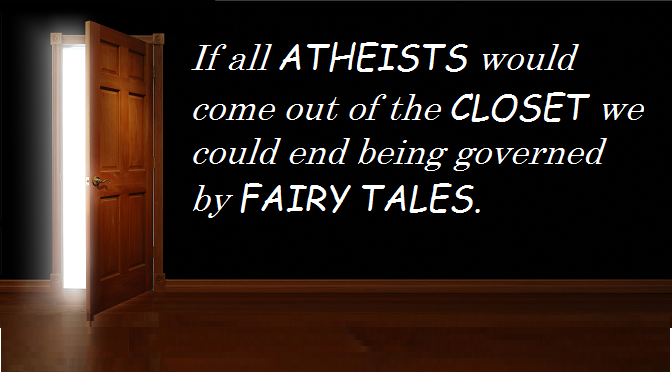 If you have come to the realization that you just don’t believe in God anymore, or that the stuff that Religion passes out as Truth no longer reflects reality, then you have a decision to make: Whether or not you’re going to let your friends, family and/or co-workers know that you no longer believe.

First of all, let’s talk about why some people come out of the Atheist closet at all.  I mean, why not just continue to pretend to believe?

Some people come out of the Atheist closet because they can no longer live a lie, and refuse to be dishonest with themselves and their loved ones any longer.   Sometimes, they come out because they believe that to “stay-in” the closet, and still pretend to believe, would just provide support for, and legitimize, the religious dogma’s they see as ruining the country they love.  Also, they may see that some preachers, pastors and priests are using religion to take advantage of people around them; especially children, the elderly, and infirm.  They feel they must come out and speak out, against supernatural belief in order to de-legitimize these charlatans.

Whatever your reason, no two de-conversions are alike.  There are no hard-and-fast rules, but you can benefit from the advice of people who have come-out ahead of you, and which may save you a lot of pain in the process.

Rule #1, however, is never “out” somebody against their wishes. It’s their life, and they are the only one who can evaluate the potential problems that they will face if their family, friends and/or co-workers knew that they were numbered among the most hated minority of Americans.

That said, the following steps are for adults who are comfortable with their disbelief, (we will talk about teens later).

1) Interact with a skeptical community.

Go online and talk to other skeptics on chat pages or comment on Atheist videos on YouTube. Find and join Freethought MeetUp Groups in your area (online at MeetUp.com).  If you’d prefer, you can join many of these groups anonymously, or under a Pseudonym. You can find many people there that have already made that journey, and may be able to help you with yours.

2) When you do decide that the time is right for you to let people know that you no longer believe, remember the old KISS rule. Just Keep It Simple, don’t make it a big thing. A lot depends on your attitude as you do it. That is, a passing comment is better than a MAJOR ANNOUNCEMENT.  Show respect for others, just as you would want them to show respect for you. You may not respect their beliefs, per se, but respect them as people, and as the people that you know and/or love.

3) Come out to your closest friends first, to get some experience under your belt, before coming out to family or co-workers. Make sure they understand that the conversation is confidential. Be aware that you will be questioned on your reasons for non-belief.

4) Believers like to cite First Peter 3 Fifteen.  “Be ever ready to give the reasons for your Belief.”  They will expect no less from you for your disbelief.  KNOW why you dismiss belief in a supernatural god and be prepared to discuss, and defend, it at length.  Read and re-read books on Christian counter-apologetics (like this one), listen to atheist podcasts and watch freethought videos.

5) I would recommend coming out to your co-workers next (more risk here) but you have to be the judge of that. Again don’t make it a big thing, just mention it in passing when it comes up in conversation. Don’t bring it up. Just like you wouldn’t like having religion brought up at work; respect your co-workers who probably don’t want to hear about your NON-religion at work as well.  However, if they do bring it up, it’s only natural that you would want to state your view on the subject. And just like you wouldn’t want to be proselytized by your religious co-workers, don’t “push” it on others.

In most instances, it will be against company policy, (and against many Federal laws) to be fired because of your religious beliefs, or lack of them. Just keep track of what is said to you, and any actions taken during this time.  If they DO fire you, that information could be invaluable to making your case in a court of law. And be sure to contact the ACLU or FFRF if that happens. Many times they will provide the much needed, and free, legal help in these matters.

6) Come out to your family. Let them know that you got your open-mindedness, honesty and integrity from them. You have to be true to your beliefs, just as they are to theirs.

Remind them that you haven’t “believed” for a while, and that you are the same person that you’ve always been. And you’re not stating for a fact that God doesn’t’ exist (that might anger them, and would put them on the defensive), but rather that you just can’t “buy” the claims of Religion anymore. ATHEISM simply means non-belief in a god. That’s all.  Then give them time to assimilate the information, and try to keep a good relationship with them, if possible.

Be firm though. Make sure they know that you demand the same respect for you as a person as they demand for themselves, regardless of religious beliefs or the lack thereof. You are an adult, and a citizen. It is your right to believe, or not to believe, as your conscience dictates. Just as much as they have the right to their beliefs, simply advise them that you will not relinquish your right to hold your own beliefs.

The above steps apply mostly to adults whose job is not dependent upon Belief.

However, if you work for a religiously zealous employer that may fire you for your Atheism, you may find that your honesty is more than your job was worth. You may then move on to find a job whose boss respects you for yourself and your talents, and not some coerced statements of false-belief.

Draw courage from those who have gone before, and the fact that you will no longer have to live a lie.

Publicly coming out of the Atheist Closet may be much more problematic for you than if you’re a legal adult with a job and a place of your own. If your parents are extremely religious, or if you believe they are capable of violence or of throwing you out in the street, then DON’T come out of the closet until you’re out of the house and able to support yourself. You will still have the rest of your life to live free of religion, and to speak out against religious atrocities.

However, if your parents hardly ever go to church, or are from different religions, it may be easier to talk to them about your atheism.  Even then though, they may very well say that you’re going through a “phase”. If it helps them to think that, that’s Ok, we’re all going through phases, all our life. There’s nothing to say that you won’t change your mind later. People do it all the time. At least the conversation will have been initiated.

Preachers are automatically fired if/when they come out. You will need to have another source of income lined up before you can come out.  Some of the options available to you would be: Minister for the Unitarian Universalists Church, Human Relations Manager or Counselor or you could write columns for magazines or newspapers, or even books.

If this is you, or if you know a preacher who is still in the pulpit but who is also seriously questioning their beliefs, have them email Dan Barker of FFRF.org.  He and Daniel Dennett have started a project, The Clergy Project, with several active ministers who honestly doubt, or no longer can believe at all; and I’m sure they would want to hear from you. They may also be able to offer you more options than those listed above. Also, go on YouTube and Look for a Video called: Daniel Dennett & Dan Barker on Ministers Who Are Closet Atheists  or do a Google search on Atheist Ministers.

Loss of Emotional Support when leaving Church:  Many people feel that leaving religion leaves a large gap in their lives. Their community of believers has been a source of comfort and emotional support for them for much of their lives. Some have just come to like the weekly pomp and ceremony of church services. Again, I would recommend joining a church that welcomes secular viewpoints, like the Unitarian Universalists churches, or the Sunday Assembly.

I would also recommend searching for and joining MeetUp groups such as Freethought and/or Atheist groups for the emotional support they offer. You can find them easily on the web at www.MeetUp.com.  If you can’t find one, then start one, even if it’s using a pseudonym.  I have a friend who has done just that!

If you’d like to read about other people’s deconversion experiences, visit PositiveAtheism.org and go to their Positive Atheism’s page on Deconversion Stories. Or do what I do, and go to YouTube, and search for “coming out atheist”

Good luck! And welcome to the large and growing group who are unafraid, nay proud, to wear the title “Atheist”.