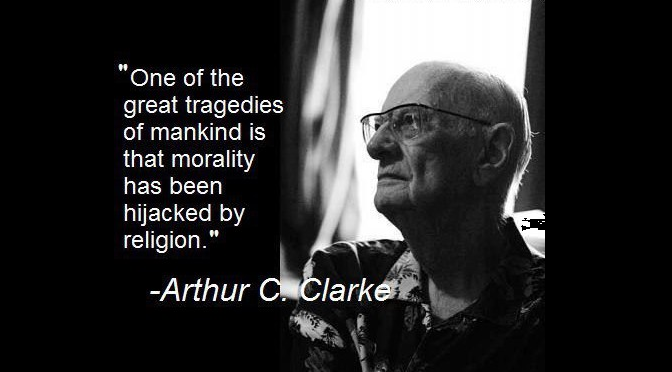 When Christopher Hitchens wrote his book God is Not Great he assigned it a subtitle: How Religion Poisons Everything. To those who are recovering from religion, it certainly can seem so. However, in many cases, particularly if that something is good, religion tends to hijack it; i.e. to claim it as its own. In other areas, it usurps or denies it.

Religion hijacks nature: According to the claims of religious folk the world over, nature is not immense, awesome, and grand because of billions of years of minute and cumulative changes to natural and biological systems. It is great because GOD is immense, awesome and grand (and by contrast, nature and Earth are only a few thousand years old). And the Church tells us that the only way to properly esteem nature is to worship GOD and go through the church to do that; tithing all the way.

Religion Hijacks Morality and goodness:  Religion would have us believe that anything that is good is not good because of the benefits to society, it is good because God says it is good.

“One of the great tragedies of mankind is that morality has been hijacked by religion. So now people assume that religion and morality have a necessary connection. But the basis of morality is really very simple and doesn’t require religion at all. It’s this: Don’t do unto anybody else what you wouldn’t like to be done to you. It seems to me that that’s all there is to it.”

Religion hijacks family: Religion often uses pseudo-kinship terms for members of their flock. Churches are very big on calling the other church members brothers, sisters, and fathers; thereby usurping and replacing your actual family members with those the church deems worthy enough to be in their assembly, their family.

Further, even Jesus very specifically says that you should turn your back on your family if they don’t follow him:

And there went great multitudes with him: and he turned, and said unto them, If any man come to me, and hate not his father, and mother, and wife, and children, and brethren, and sisters, yea, and his own life also, he cannot be my disciple. – Luke 14:25-26

This is very much like something any modern-day cult leader would say: “Turn your back on your family if they don’t follow you into our family, or try to turn you against me.”

Religion hijacks spirituality: Any feelings of awe and wonder that you may get when in love, exploring the heavens, or even holding your own baby in your arms, is not naturally occurring.  Instead, Religion cries: “Oh yeah, that’s ours… we did that. You can’t have that without supplicating yourself to God, um… through us of course.”

Oprah Winfrey, in 2013, had marathon swimmer and atheist Diana Nyad on her show, and told her that she couldn’t possibly be an atheist if she experiences awe. Aside from the hubris of trying to tell someone else what they believe, Oprah, using religious thinking, essentially tries to tell Ms. Nyad she can’t possibly experience a common human emotion if she’s an atheist, thereby sending the unspoken message that atheists are sub-human.

Religious leaders will actually try to generate “spiritual feelings” in you, then claim it is God. They often use music, lighting, timing and oratory in church services to promote a sense of spirituality in you (a perfectly natural response to stimuli) then they claim it’s the spirit of God manifest in you. The entire production, from start to finish, is choreographed to elicit just that effect, then bammo switcho, it’s not us, it’s God, moving in you!

Michael Sherlock in his article Church and Hypnotic Manipulation compares what happens in church to hypnosis, which is presented in 5 stages:  introduction, induction, deepening, suggestion and awakening.

“It is the contention of this author that the same five stages can be found within most Christian church services. The hypnotic techniques employed during church sessions have served to further entrench Christian beliefs into the minds of Christian subjects and so demonstrates the mentally manipulative religious package offered by the Christian religion.“– Michael Sherlock, The Church and Hypnotic Manipulation, Sunday Morning Hypnosis.

Sherlock goes on to say, “Christianity, since its beginnings, has employed various forms of psychological manipulation which is focused on reinforcing the beliefs of passive believers. It demonstrates that religion, as is also the case with politics, is not about truth, but rather, it is about persuasion and manipulation.”

Religion hijacks our capacity for self-healing: Homeostasis is a medical term that describes the body’s ability to return to normal after an illness or injury. Religion claims that it is God (or a god appointed healer) that heals you if you get better without medical attention, and blames the victim for lack of Faith if they do not.

A more direct example of how Religion hijacks healing is when clerics and preachers convince parents that modern science and medicine cannot cure their ailing child, and that the only real cure is prayer. Every single year brings more eports of deaths that could have been prevented by even a moderate amount of medical attention; medical attention that was denied by parents who either thought that only prayer could save their child, or who were directly restricted by religious dogma not to have blood-transfusions or vaccines.

Religions hijack education and science: Church leaders are telling more and more parents to ask for government school vouchers to remove their children from public school and send them to religious faith-based schools. They are also trying to get “Intelligent Design” taught in regular public schools along with evolution; challenging science and evolution itself in the classroom.

H.L. Menken, during his coverage of the Monkey Trial in 1925, listened to one woman preaching. She was a member of the Holy Rollers (Church of God). She was preaching against the reading of books in general. It seems a wandering book agent had stopped at her house and she refused to touch any of his books saying, “If what was in it was true, then everything in it was already in the Bible. If it was false, then reading it would imperil her soul.”

Remember, this was a religious leader saying not to read anything besides the Bible. They obviously want you uneducated, and ready to believe anything they might want to tell you.

In her book Infidel, Ayaan Hirsi Ali says that in many African countries some schools have already been taken over by Muslim fundamentalists that don’t teach anything other than the Koran. In many cases, it is taught in the classical Arabic, a language that many of the students do not speak. They simply memorize a religious text, in a foreign language, and they call that education.

In the case of homosexuality, religions hijack science by attempting to pray away the gay and to quash any official discussion about it in class. Religious groups use “ex-gay” therapies and claim that they have actual scientific merit. It involves a combination of therapy and prayer to “cure” homosexuality. This, of course, has no actual effect on their homosexuality; it only humiliates and subdues the subject into acting as if they were straight. But that counts as enough of a victory for many religious orders.

In 2009, the American Psychological Association released a statement renouncing reparative therapy. It cited a dearth of scientific evidence supporting its efficacy and the likelihood that it may cause harm.

Religion hijacks your mind by hijacking logic and reason: Not so much by claiming it as their invention, but by usurping it altogether and replacing it with Faith. And by Faith, I’m not talking about the “little-f”  faith of everyday reasonable expectation, but the “capital F” Faith of religion; believing things without evidence, and even in the face of contrary evidence.

When religious leaders can’t sell you on the idea of blindly accepting Religious Faith, they will resort to defaming human reason itself. Martin Luther, the father of Protestantism, and one of the most famous religious leader of all time, called reason a whore. Yes, you read that correctly:

“Reason is the Devil’s greatest whore; by nature and manner of being she is a noxious whore; she is a prostitute; the Devil’s appointed whore; whore eaten by scab and leprosy who ought to be trodden under foot and destroyed; she and her wisdom… Throw dung in her face to make her ugly. She is and she ought to be drowned in baptism… She would deserve, the wretch, to be banished to the filthiest place in the house, to the closets.” – Works, Erlangen Edition v. 16, PP. 142-148.

Reason is the one thing that elevates us above the animals, and Martin Luther would have us turn a deaf ear to it; to deny it totally, in favor of Faith.

And finally, religion hijacks society: Religion hijacks society by culling gullible members from the larger society and claiming that they are the chosen people, i.e. the “in-group” and everyone else is the “out-group.” This effectively divides societies into artificial denominations and supernatural belief systems that turn brother against brother, Catholic against Protestant, Muslim against Jew, Shia against Sunni, orthodox against reformed, etc.

There are many more potential items for this list of hijackings. I’m sure the reader can think of important parts oi their life that religion has either hijacked, usurped, or denied. What can you name?