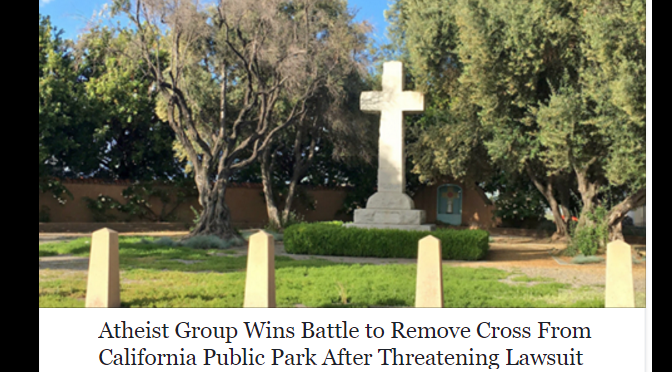 People wonder why atheists and the ACLU sue to remove Crosses from public parks, 10 Commandment plaques from Schools and Courthouses, and Jesus pictures from Schools.  Here is just a short article to explain it in a few words.

The Government, and it’s representatives, are constitutionally prohibited from favoring one religion over another. Period. Putting a Christian symbol in a government building (i.e. on any Federal, state, county or city government property) sends the message that the USA favors Christianity over other religions.

American citizens (adult and children) who are Hindu, Muslim, Mormon, Sikh, Secular, etc, see this as a finger pointing straight at them saying “You’re religion is wrong, and you’re not going to receive justice from our justice system, or equality in our schools.”, and the messages is coming directly from the government of the nation they have come to call their home.

Christians have every right to practice their religion in America, as do every other religious faith, or non-faith; in your, home, church, and family gatherings; and on every media outlet there is. And you CAN EVEN practice it on the streets and in public buildings, as long as every other religious position is given the opportunity to do so in equal measure.  The law prohibits the government from giving preferential treatment to your religion (or any religion).

THAT is the reason that the Freedom From Religion Foundation and American Civil Liberties Union WIN all those cases they they bring against this type of religious infringement.  The constitution supports their position, which is why they hold that position in the first place.

Please keep this in mind as we enter the next four years as I am certain that we will see just this kind of thing happening more and more frequently.  And because our laws are based on the constitution, and the constitution says that government cannot show favor to any particular religion, your local government will LOSE any time they try to do so.

Remember this when you see your county commission authorize a 10 Commandments plaque for your courthouse.  Remember that they are 1) breaking the law and 2) they are about to waste a LOT of your tax dollars in a doomed attempt to  defend it in court. These are your hard-earned tax dollars that should go to rebuilding the crumbling infrastructure of our country.