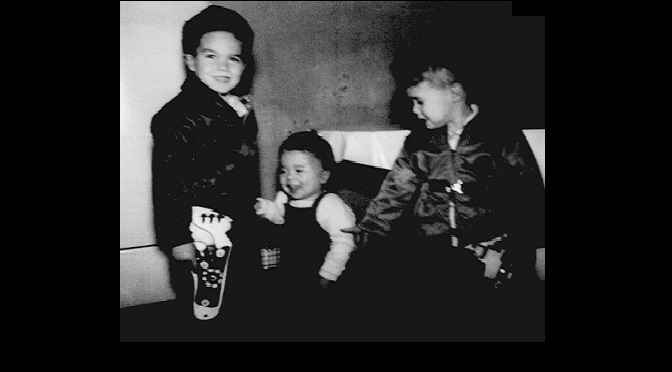 I was born into a Southern Baptist family in west Tennessee, the second of three sons. (That’s me on the right.) My mother was pretty religious and pressured me into getting baptized when I was around 10 years old. My father, a WWII veteran, wasn’t very religious, but even so he would sometimes refer to the “Old Man Upstairs” and would say prayers at meals. I went to church only occasionally, and never as a family, because my mother said that churches were full of hypocrites, in that they professed the values of Jesus but did not live by them.

I had a wonderful science teacher in high-school, Mrs. Allen, and I loved her classes.  I also read a lot of science-fiction so I had a good understanding of  the way that nature worked, and what technology could and couldn’t do.  So when I compared that to what the preachers tried to tell me of prehistory and miracles, I was doubtful that any of the stories were really true.

I attended high school in a rural west Tennessee town. . I was a believer growing up, in high school and through four years of the Navy, volunteering for service during the Vietnam War era.  After leaving service, I took advantage of the GI-Bill to attend the University of Tennessee in Knoxville, starting in the fall of 1972, living in Hess Hall. There I met Hilda, a pretty young girl from South Carolina whom I immediately fell in love with.

Hilda, it turned out, was as an atheist, the first I had ever met. She was 17 and very intelligent.  She had skipped her senior year in high school to go to college. She was also very far ahead of me in knowledge and understanding of the tenants of Christianity. (Her father was a deacon in the Southern Baptist church back home in South Carolina.)

I was amazed that she, an atheist, knew my religion better than I did and rejected it. We had many long conversations about Christian beliefs in general, and mine in particular.

I had never been a strong believer, but had never doubted that God existed. At that time I believed that I would eventually have to “turn my life over to Christ” at some time in the future. But here was this little slip of girl telling me that she didn’t believe it, that there were GOOD reasons not to believe it.

Although I believed in God, I didn’t know that NOT believing was an option. I mean, in the 60’s everyone I knew, from the postman to the President of US was a professing Christian.  However, I never really “took” to religion, I didn’t like it. I guess I shared my mother’s distrust for church people. I mainly felt that religious folk were far too eager to claim goodness and Truth as their own property; but that claim always seemed to turn out to be shallow and brittle.

Hearing Hilda talk about atheism was like a breath of fresh air to me. I didn’t have to fear hell? I didn’t have to live forever in a heaven that I could only believe would be the most boring place in the universe? I didn’t have to place myself in the power of some preacher, whom I had an instinctive distrust of? There was no one monitoring, and judging my every thought? Wow! This was heady stuff!

Around Christmastime 1972, we had one particular conversation that lasted all night. The points that she made about Christianity, and indeed most religions, got me to seriously reconsidering my Christian beliefs.

Since this took place during my first quarter in college, I used the rest of my college career to study different religions, different mythological beliefs, as well as the sciences: anthropology, astronomy, biology, geology, physics and evolution. By the end of my sophomore year of college I was pretty much an atheist myself. The entire transformation took around two years of study and introspection.

For the next 30 years I was an apathetic atheist (apatheist?), and in the closet about my atheism. I wasn’t concerned very much with what most people were doing with their beliefs.

I felt they were nonsensical, but that they didn’t really concern me. That is, until 3 things happened almost simultaneously to wake me up on that subject:

About that time, I had been reading on the internet about atheist activists and about the work they had been doing to raise awareness of the harms that religion do.  There were a couple of the “new atheism” books that were in the works but had not come out yet. Mostly from the authors that were dubbed the new “Four Horsemen of the Apocalypse.”

I had also just found atheist podcasts online.  Mainly the The Infidel Guy had a large impact on me.  He had both atheists and religious leaders and held both of their feet to the fire!  The religious leaders always seemed to false and duplicitous. It was then I started to realize that I needed to get involved.

I had just recently discovered a Freethought group in Oak Ridge (that also met in Knoxville) called the Rationalists of East Tennessee (RET). They provided support and camaraderie to me during this time of transition. It was a great group of high-thinkers, consisting of college professors, authors, scientists from Oak Ridge and Knoxville. I found their Sunday presentations and discussions to be very refreshing and edifying.

However, after a couple of years of attendance, I became impatient with RET’s lack of activist and community outreach, as well as their reluctance to self-identify as atheists (although virtually all of them were). They thought the term carried too much baggage, even though that baggage was the result of centuries of unjustified vilification by the religious community. I felt that we needed to accept and redeem the word itself.

“Atheism” is an honest, fitting appellation, and it represents one of the greatest accomplishments of my life.  I am very proud to have challenged and succeeded against a religious upbringing, the collusion of large segments of society and the bigotry against those who question religion. To have actually come to understand the reasons why the great thinkers past and present have rejected religion was wonderful and liberating. I would not water it down by denying the label just because it might offend the very people who had made it a curse in the first place.

By 2002 I had decided to start an atheist social group. I placed a small ad in the local paper to announce a monthly atheist meeting. After a few months of basically sitting alone for an hour at various coffee shops, I found a few people who wanted join. When MeetUp.com started, I turned I signed on and turned my group into a MeetUp (Nov. 2002)  to take advantage of their tools for recruiting members and scheduling meetings.

It was very slow going for seven years, trying to get people to remember the particular date of the month for the meeting, and to actually come out then, but eventually I had a group of 12-15 people coming to Panera’s or Starbuck’s every month.

That monthly meetup venue was changed one terrible Sunday during the summer of 2008 in Knoxville.  A man carrying a shotgun in a guitar case entered the Tennessee Valley Unitarian Universalist Church, in Knoxville, and started shooting its members. He was quickly taken down by the congregants and arrested, but the damage was done.

Why did he do that?  Well, the Unitarian Universalist churches have policies that are friendly to gays and atheists and encourages them to join.  i.e. it was a very liberal church. This shooter was a Christian conservative extremist who was angered at the very liberal stance of that particular church. Simply put, it was just a another attack by a religious extremist on peaceful people.

Attendance at our atheist gathering dropped to 3 people the month after the shooting, and to 2 people the next. I believe that after that shooting, my members were literally afraid to sit next to an “Atheists of Knoxville” sign that I had sitting on the table.

So I changed the venue to Tuesday night Happy Hours after the example set by the Atheist Experience group of Austin, Texas, whom I’d been following on the internet for a while.

That changed everything. Members didn’t have to remember the date anymore, it was every Tuesday. I got rid of the sign, and replaced it with a recognizable book standing on the table. Membership really took off after that! I like to joke now that “Atheists like beer, who knew?!”

Now we have an on-line membership of over 1,000 people (as of June2020) and we’re still growing; with 25-30 people coming out every week!  As of this writing, A.S.K. and R.E.T. are doing fine. Between them we offer Knoxville and East Tennessee 8-12 opportunities every month to meet with other atheists, agnostics, freethinkers and humanists. I’ve been broadcasting an FM radio program (and podcast) called “DigitalFreethought Radio Hour” on WOZO radio for over 5 years now. (Listen on WOZORadio.com every Wednesday night @ 7:00 pm.)

At the time of this writing, I’m happy to be able to report that Freethought is alive and well in east Tennessee.

7 thoughts on “My De-Conversion from Christianity”