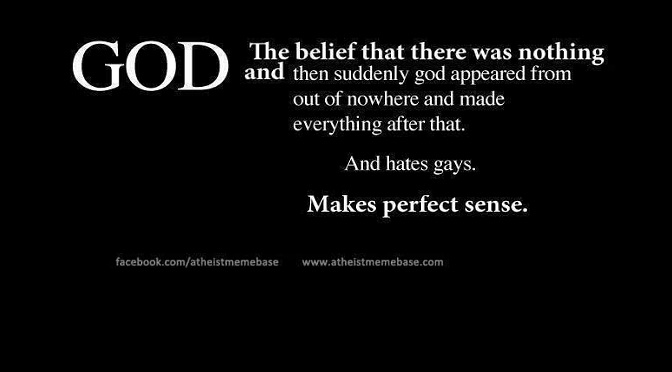 Why don’t I believe in God? First, think about why you don’t believe in Zeus, Thor or the gods of any other religions. Same reason. There’s no evidence. Before you say “What do you mean, YOU’RE evidence of God. He made you!” I’ll have to point out the logical fallacy that you would be using: Presupposition.

You presuppose the existence of God, and mentally assign Him the power to create me, then say “How can you say there is no God? You’re standing right there!” That would be like me saying, “See that car there? I made that car, alone, using only toothpicks. How can you doubt it? There it is!” In my claim, I would have presupposed my ability to make cars out of toothpicks before I made the argument.

God, if nothing else, should be logically consistent, but He’s anything but that. The Christian God, as he is most commonly described (all-loving, all-knowing, and all-powerful) can’t exist if he has those traits in the face of evidence for evil in the world around us. If He did, then this all-loving God would be allowing innocent children to get cancer and be raped by priests. This ultra-compassionate God would be sending (or allowing) hurricanes and earthquakes to kill thousands of people every year. This all-caring, all-knowing God would be allowing people to fly planes into our skyscrapers and murder thousands more. The examples could go on and on.

The all-knowing, all-powerful, all-loving God of Christian description is logically impossible according to the Riddle of Epicurus:

Is God willing to prevent evil, but not able? Then he is not omnipotent.

Is he able, but not willing? Then he is malevolent.

Is he both able and willing? Then whence cometh evil?

Is he neither able nor willing? Then why call him God?

If He allows children to get cancer and priests to rape them without interference; and allows tsunamis and hurricanes to kill thousands; if He allows bad men to rape innocent women; if He allows evil to exist in the world, then 1) He can’t be all loving, 2) He can’t know about it, or 3) He’s not powerful enough to stop it. You can have two out of three, but not all three.

If you will read your Bible with a critical mind, you’ll see that the Bible is anything BUT a good book, and that that God is anything but loving. It positively condones slavery, the property status of women, and the stoning of women for not being a virgin. The Bible also tells us to search for witches among us and to kill them when we find them; and it commands us to kill homosexuals. All told, the God of the Old Testament gives us 613 commandments, and then in Deuteronomy 28:53, tells us that if we do not obey them, He will bring us so low that, among other punishments, we will be forced to eat our own children. Even Jesus, like a modern cult leader, tells us to leave our families if they do not follow Him (Luke 14:26).

Many Christian apologists claim that “God is the potter, and we are the clay. He can do anything He wants to with us and it’s OK.” Really? So, might makes right? There’s a lot of difference between unfeeling, unanimated clay and living, breathing people. Those apologists would demand more respect for the life and feelings of an animal than they hold God accountable for with human beings.

The God of the Bible actually is extremely violent and cruel. He’s also jealous, murderous, impetuous, peevish, possessive, bullying, irrational, misogynistic, irresponsible, and homophobic.  And notice that ALL of these are human traits! And every Christian apologist that I’ve ever heard constantly states that “God is so far above humans that we could never understand His motives.” Well, reading the Bible, aren’t you supposed to understand His motives? Isn’t that what the stories are all about; understanding what God wants and why?

Richard Dawkins called God “the most unpleasant character in all of fiction” and judging from what I read in the Bible about him, I certainly agree with that assessment. God directly orders millions of deaths in the Bible. By comparison, the only people Satan killed were Job’s kids, and that was only after God told him he could!

And God seems to be constantly surprised by the actions of humans. How can He be omniscient and be surprised by anything? Why would He get angry with us (a human emotion) when we’re simply part of the plan that He laid down in the first place?! Aren’t we just doing what He knew we would do?

God supposedly gives us a choice to believe, but then doesn’t supply any good evidence for believing, and He theoretically provides a lot of evidence to support the contrary: evolution, DNA, fossils, logic, reason, etc. The main evidence that Christians use to support their God-claims is the Bible, but there are hundreds of holy books all around the world, all claiming to be the word of God? All He’d have to do is show Himself, unambiguously, to the entire world! According to the Bible He used to show himself and perform miracles all the time! Why not now?

You will then say “Oh, that’s why you have to have Faith”. Why? Many people in the Old Testament saw either God or his miracles. They didn’t have to rely on Faith alone. Even Jesus supposedly gave his disciples miracles to demonstrate the truth of his message. Why are we supposed to just have Faith? All the earth’s religions say they require faith, are they all correct? If there is only one God, why are there are thousands of religions in the world? Does he want all the believers of other religions (or even members of other Christian sects) to go to hell?

About the Devil… Well, is God all-powerful and all-knowing or not? How can ANYTHING or ANYBODY stand in the way of what God wants? Isn’t God supposed to love us more than any parent ever loved their child? WHY would he allow Satan to use his awesome, magical powers to fool us into disbelieving in God and His message? What chance does a mere mortal have against that? Is God just playing mind games with us, with our eternal souls at stake?

Conversely, when looking at the world through the eyes of a rationalist/atheist, the world makes perfect sense. Some people, good and bad, will die in natural disasters. Little children will get cancer as a certain percentage of the population. Bad people will do bad things just because they’re bad, or angry, or mentally ill, and many times they don’t get caught. There’s no God, no malice, and no “mysterious plan.”

Again, why do you believe that the Bible is the actual word of God? I mean, at least honestly consider the question. If you say “Because it says so in the Bible,” then that’s circular logic, and EVERY book would be considered true on those grounds. Also, do the actions of your God really make sense to you? Or does he really seem to act like a spoiled 8 year old?

What this boils down to is that gods are created by men, and the Bible was authored by men, not the other way around.