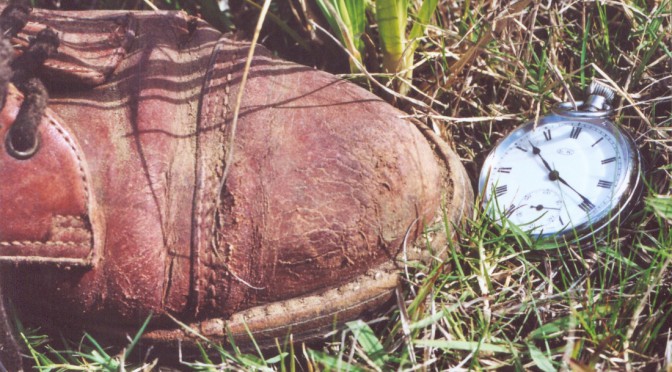 Back in 1802, William Paley made an argument for the existence of god that is still being used by “Intelligent Design” proponents today.  I most recently heard it from a Jehovah’s Witness who came knocking on my door.

The essence of Paley’s argument is that if you’re walking along in a field, or along a beach, and look down to find a pocket-watch on the ground, you can safely assume that it was designed, i.e. that it was designed by an intelligent entity because it stands out from everything else.  It is unique in the landscape.  You would never assume that it just formed there naturally.

However, according to believers, isn’t everything designed?   Isn’t God supposed to have designed every leaf and every grain of sand?   Aren’t they really saying that this is an example of something designed nestled among a field full of design?  Or a beach full of design?  Why would it stand out at all if that really were the case?  Paley’s argument fizzles when you think that the watch does indeed stand out from natural things.  That is because it is different, i.e. designed by an intelligence, that it stands out from its natural surroundings.  It is self-evident that watches are indeed designed by intelligence, but their surroundings are not.

Apologists then go on to say that nature can’t make an eye because it is too complex.  Nature couldn’t do it without God.  But this is a logically flawed argument in more than one way.  It’s flawed in that it’s an argument from ignorance.  (Many people hearing this think that this suggests that the person making the argument is stupid, it’s not.  Ignorance is simply a lack of knowledge of other options).  Most Christian apologists don’t study biology or evolution to any real extent; they just claim/assert that it’s incapable of making an eye, or a wing, or a bacterial flagellum.  That is, they are making an assertion when they are ignorant of what nature is capable of.   However, if you read any of the thousands of peer-reviewed scientific articles on the subject, you find that natural selection can, and does, do just that.  (Heck, just watch the documentary on the Dover Trial, “Judgment Day”, America’s latest “Monkey Trial”; they go over this point thoroughly.)

It’s also a false dichotomy; i.e. you’re saying that it’s either Nature or Yahweh (a dichotomy), when you really have to consider every possible God, or Being, or process that could create a design.  How about aliens?  How about Fairies (if we’re open to considering supernatural beings) or sorcerers from other universes?

But seriously, the main thing is that watches do not reproduce.  Living organisms can and do reproduce and pass on mutations that change the following generations in ways that are advantageous (and disadvantageous) to the species.  It’s called evolution by natural selection, and it fully explains not only how species change over time, but how they can evolve to fit their particular environment so well that the future of their species is assured.

We all know of natural processes that create design:  Water droplets and cold can make snowflake.  A small piece of crystal can leach materials from its surroundings to make incredibly large and growing crystalline structures.  The simple RNA molecule can replicate itself easily in nature.  One can think of many more examples, all of which are just following simple laws of chemistry and physics.

Of course the believer will just say that “Sure, laws of physics set in motion by God.”  But consider this:  Back before Man knew what actually caused babies, they said each baby was a miracle, and that only God can create a baby.  Now we know quite a lot about reproduction.  We not only know so much about it that we actually make babies outside the body (in test-tubes), but we will eventually be able to correct genetic errors before the baby is born.  This is one area where it’s no longer necessary to invoke god.

Now carry that on to weather, mental-illness, cosmology and every other area of knowledge that we used to invoke Gods and demons, and you see that they exist on an ever diminishing island of ignorance; i.e. gods exists only in the gaps of our knowledge.

Some people are actually STAYING ignorant, willfully ignorant, so that they can still believe, and they’re recommending it to others.  Last election, Rick Santorum actuallysaid that you should keep your child from going to college:  “Sixty-two percent of kids, who enter college with a faith conviction, leave without it.”  He went onto call this higher education, “indoctrination”.

The God explanation is being pushed farther and farther back in arguments. There was a time when God was responsible for every daily event; every baby, every lucky accident and every thunderstorm.  But now, when we have explanations for just about everything that happens except for the most remote problems in cosmology, believers fall back to “oh, well, god did that then”  How much longer will that assertion have any merit at all, one wonders.

If demonstrable facts about the world and nature undermine your belief in god, it’s probably not the facts that need to be denied and ignored.  Arthur C. Clarke said that “A faith which cannot survive collision with the truth is not worth many regrets.” Religious faith is colliding with truth every day in America, and all over the world.  Religious beliefs have had their day.  There was a time we needed them: when we didn’t understand what lightning was, or how it caused thunder; when we thought that demons were responsible for mental illness or when loved ones grew ill and died.  When comets blazed across our skies, it helped to think that they were a sign from the gods sent to give us some knowledge of future events.  We felt important.  We felt directly connected to the universe.  They, at least, gave us some explanation of events; some way of understanding what was happening.

But now, we know that we ARE connected to the universe in the most intimate sense.  We know that every atom in our bodies were fused in the hearts of long-dead stars; stars that exploded and spilled their precious contents into the void so that we could live.  We finally have a very profound understanding of the universe around us.  Seek that knowledge, it’s available to you now.  Real, valid understanding is at hand.  Let’s not chuck it all out in favor of a set of ancient stories written by long-dead preachers, which served us millennia ago but which now only hold us back from a real understanding of the universe we live in.