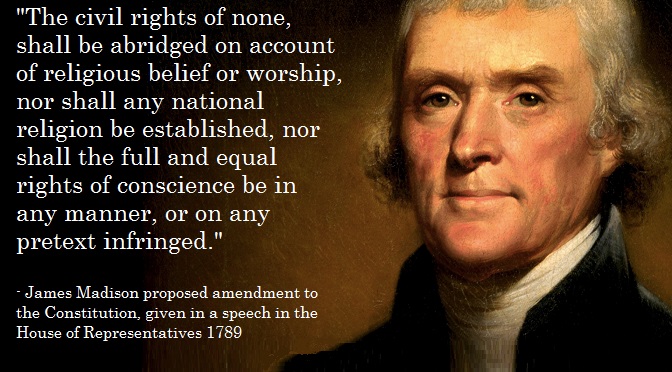 Below is the address that I gave before the Knox County Commissioners meeting on August 6th, 2012, concerning the proposed amendment (?) to the Commissions bylaws that formally allow Christian Prayer before each monthly meeting of that body.  I thought that it might be useful to those who wish to speak against that in their area.

Hello, my name is Larry Rhodes.

I am a citizen of Knoxville and have been for 40 years.  I graduated from to the University of Tennessee here in Knoxville.   I’ve worked here, owned homes here and, for 17 years, ran my own business here.

I was born into a Southern Baptist home, and was raised Southern Baptist, but even though my religious views have changed over time and I am no longer a Baptist, I am still a Citizen; and as such I expected my government to represent me as a citizen without injecting their individual, personal, religious views into the policies that govern my life.

The first amendment of the constitution of the United States, which you all swore to uphold, forbids the making of any laws which represent an establishment of religion.  Therefore, you should be aware that you are about to vote on an unconstitutional action.

If it passes, it will be challenged, and it will cost the city, and county, a LOT of money to defend; money which we have precious little of.

Knox County was probably, at one time, 100% Christian, and Baptist, it is no longer that. It, and indeed America as a whole, is now a community made up of Baptists, Catholics, Methodists, and Mormons; as well as Muslims, Hindus, Sikhs, Buddhists and non-believers.   Indeed the category called “Other” in Knox County currently makes up nearly 30% of the population; all of which are tax paying citizens of Knoxville and Knox County, and as citizens, they have a right to be represented equally under the law.

This board today votes on a policy of having religious prayer start the city-county meetings.  And you may well vote it down, but if you don’t, it will not be something that represents all of its citizens.  It will be a specific prayer to a specific God of a specific religion. And even though you may deem it a “generic prayer”, it will still leave out all the humanist, secularist, atheist, and agnostic citizens of this area, a segment of the population that, like it or not, is growing every day.  You will be sending a message to those citizens; a message that says “You are not really citizens.  You’re allowed to live here and pay taxes, but REAL citizens are those who share the religious beliefs of us, the majority.”  This is not only un-American; it is the first step down the road of fascism.

As a citizen of Knoxville and Knox County for 40 years, I demand my right to be represented fairly under this government, no matter what my religious beliefs are; or even whether I’m religious or not.

You may be thinking that you must follow your Religious Faith and do as it dictates.  However, Faith has not been proven to be a good path to Truth.  If it were, there would not be thousands of different religions on the planet, all claiming to be following Faith.

Remember that the mother in Jonesboro, Guyana who gave her child poisoned Kool-Aid was also following her Faith.

Remember, those misguided Muslims who flew planes into the buildings in New York and Washington DC were also following their Faith.

Think about those members of the Branch Davidian ranch in Waco who, when arming themselves and fighting the federal government, were also following their Faith.

Faith, indeed, allows you to believe anything.  Faith is the permission you give yourself to ignore anything to the contrary.

Please follow your conscience, but leave Religious Faith at the door; and do NOT practiceyour religion for me in the halls of government.

You, the members of this commission, should be very concerned that you’re using the democratic process to vote on this type of issue, because if current national trends continue, Muslims will eventually outnumber Christians in America. That means that you would be facing a time in the future where it will be Muslim prayer instituted here.

Instituted, in part, because of the actions you may take here today.

The whole idea of the separation of church and state did not come from the Founding Fathers; it came from those early churches themselves.

The churches of the new nation we’re very much afraid that the Congregationalist Church would insinuate itself into the newly formed government.  They were the ones who were adamant that no religion get into the government. They knew that that was the only way to have true religious freedom.

It is much better, by far, to follow the U.S. Constitution, as you have sworn to do, and work to keep all religions out of government, thus ensuring true religious freedom in America.