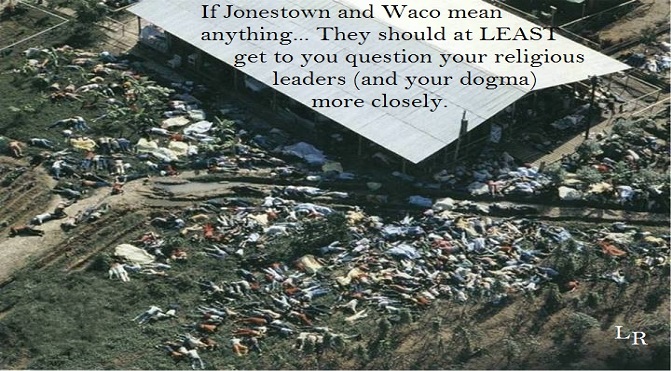 If you’re having a conversation with a loved one who has turned aside from your religion, it’s very likely that you will hear them state that your religious beliefs are not credible. Your loved one is now a non-believer basically because they can no longer make themselves accept the claims that your religion puts forward as truth.

Many believers think that atheists “choose” to deny God because they don’t want to live under the strictures of that religion anymore. They think that the apostate enjoys “sinning” and just wants to go where the fun is. I suppose for a few shallow individuals, that might be the case, but those people will quickly return to the fold because they still believe that God is real, is watching them, and will punish them for their actions.

However, for the vast majority of atheists that is simply not the case. Atheism is not a choice, or a rebellion. It is a realization. Atheists have come to the realization that they can’t believe the fantastic stories anymore.

Let us not lose sight of the fact that even the most basic tenants of Christian religious beliefs are unproven, and we are told we must take them on Faith; i.e. without proof. Indeed, as discussed in the previous chapter, if they could be proven they wouldn’t require Faith.

Below, we’ll look closely at the basic beliefs of the predominant religion of America, Christianity. Most Christians claim all of them are real, and expect us to accept them, yet they present no evidence for any of them, much less have they been shown to be scientifically documented fact. (Remember, the Bible is not proof of these claims; the Bible is the claim. Christians are just repeating those claims.)

After 2000 years, Christianity has yet to prove (or even provide evidence):

1) That souls exist and that every person has one

2) That souls can, and do, contain our mind, memories and identity independent of the brain

3) That souls survive the death of our bodies intact

4) That they will continue to live on for an eternity

5) That there are places for souls to go after death

6) That the specific places, heaven and hell, actually exist (each one would have to be separately proven).

7) That anything supernatural exists

8) That any kind of supernatural intelligence exists

9) That any such supernatural intelligent being is capable of interacting with the natural universe at all.

11) That these supernatural beings are actually GODS as we understand the word, and not just aliens that can manipulate advanced technology

12) That one of those gods is actually the god of Christianity, Yahweh

14) That He created Man without ancestry, thereby proving that evolution isn’t real

15) That mental telepathy (prayer) is real

16) That Yahweh is actually listening and cares

17) That magic is real, i.e. that God, Jesus, or the prophets (or anyone) could say words that bend the laws of physics to make things come into existence

18) That miracles or prophecy is real and actually took place, AND were gifts from Yahweh

19) That the specific magical beings of the Bible (angels, demons, Satan, cherubim, the talking serpent, etc.) are real or have EVER existed, and that the stories about them in the Bible are true

20) That SIN exists and that we need salvation from it

21) That we must be “saved” from sin by the simple act of believing, the Tinkerbell effect, or that we can be saved at all

22) That fruit can actually hold the knowledge of Good and Evil, or any abstract knowledge for that matter, and can transfer it to the one who eats it

24) If so, that that child was, indeed, the Jesus of the Bible

25) And that Jesus was the one prophesied as the CHRIST. (Even the Jews who believe most of the other claims don’t believe that.)

MAYBE, IF you could prove each and every step of this chain of claims to be unimpeachable fact, then belief in the Christian story could be warranted.

Before you can use any of the claims mentioned above in an argument (i.e. “If you don’t believe in God, and ask Jesus Christ for forgiveness for your sins, you’ll go to hell”) you have to actually demonstrate that those several independent claims are real;  that the claim as a whole is true. Remember, the burden of proof is on the one making such claims, not those who simply say they don’t believe it. (We’ll talk more about the burden of proof in a later chapter).

The Bible itself is proof of none of this. You can’t use the Bible to prove the Bible. If that were true then every holy book (or indeed any book, even Harry Potter) could prove itself to be true just by stating that what is in it is true.

You may now say that it is up to me, the unbeliever, to disprove all those claims. Sorry, that’s not the case. The problem is that Religion makes positive claims about the universe, life, the afterlife and salvation and tells me that I have to believe it on pain of eternal punishment.  Saying that the atheist has to disprove all of this is not addressing the central point here. Christians are claiming that it’s all true, and the atheists aren’t saying “No it’s not.” We’re saying “Sorry, I don’t believe it.” There’s a big difference there.

These are very specific claims which we are expected to accept without any hard evidence. And not all claims are equal. Carl Sagan once said “Extraordinary claims require extraordinary evidence.” If you claim that you just brought a new puppy home as a pet, I would probably accept that claim without evidence because:

1) I know puppies are real.

2) I know people take them home as pets all the time.

3) I wouldn’t be hurt by believing that claim, even if it were false.

Compare that to when you claim that my “soul is damned to suffer for an eternity in hell if I don’t believe as you do, and that I must accept everything in your holy book as truth, and give 10% of my income to your organization.”  I would want to see some proof to back that up.   If I say “Sorry, I don’t buy it,” it is quite unreasonable for you to ask me to take on the burden of disproving your claims.

Religions throughout history have been making fantastic claims about the world and demanding that everyone believe them. Then they claim that if we don’t believe them, something terrible will happen to us. Sorry, those days are over.

Note: I have addressed this chapter to Christians, but if you are of a different faith and your belief system is also dependent on the same basic concepts of where your soul will be spending the afterlife, maybe you should examine your beliefs a bit closer as well. Not just the main story, or the “take-away” message, but the minutia of the beliefs themselves, as I have with the numbered list above. Break them down and ask the hard questions. Demand proof before you invest your time, money and efforts in them; and especially before you pass those unexamined beliefs along to your children, and their children.