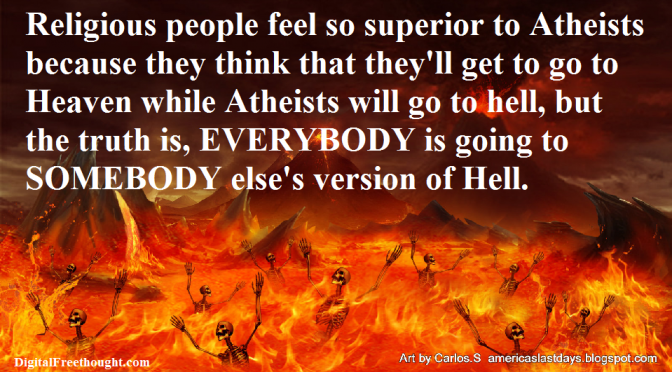 This is a common question that atheists get all the time.  However, the people asking it never seem to stop and think that it’s not only Atheists who don’t fear their hell. Three quarters of the Earth’s population are not afraid of going to the Christian hell either.  Muslims, Jews, Hindus, Confucians, Pagans, Shintoists, Buddhists, Taoists, Sikhs, Shinto, Jains, Baha’I, etc. are not the least bit worried about the Christian hell.

Why aren’t Christians worried about going to one of their hells?  If you think about it, everybody is going to somebody else’s hell.

Hell is just another of the religious concepts that Christians (and others) claim to be true and expect everyone else to just accept without any evidence.   It’s one of many, many supernatural claims that religions demand we believe; like heaven, souls, demons, witches, saints, miracles, sin, angels, etc.   (For a comprehensive list click here.)  Each and every one of these supernatural claims has to be demonstrated to actually exist, but not a single one of them ever have been.

For centuries, people have been sentenced to burn at the stake, or suffer excruciating torture, just on the testimony of a neighbor who said that they saw them turn into a demon, or were possessed by one.   No proof was necessary, just their word.  We are still allowing this to go on today.  We see news articles all the time of people being killed during an attempted exorcism.  In June, 2013 LiveScience.com reported:

A Virginia man was convicted earlier this week in the death of a 2-year-old who died during a 2011 exorcism. Eder Guzman-Rodriguez beat his daughter Jocelyn to death in an attempt to rid her of the demon he believed was inside her.

Police summoned to the scene encountered several people holding Bibles outside the home, where Guzman-Rodriguez stated that he had also become possessed by a “bad spirit” when he punched and choked Jocelyn to death. The girl was found on a bed, wrapped in a blanket surrounded by Bibles.

Such beliefs in demonic possession and the violent exorcisms that may follow have a long history and can harm the most innocent among us, children.

If you look for them, you can find this type of thing all over the internet.  Men, women, and children are still being tortured and killed today, in America, because of a belief in the supernatural.

In 2001, Andrea Yates drowned her five small children in a bathtub.  While in prison, she told her jail psychiatrist: “It was the seventh deadly sin. My children weren’t righteous. They stumbled because I was evil. The way I was raising them, they could never be saved. They were doomed to perish in the fires of hell.”  She also told her jail psychiatrist that Satan influenced her children and made them more disobedient.

True, she had some mental problems, but they were given a supernatural framework by the religion she subscribed to.  Her religion, Christianity, made her believe that her children were going to burn in hell, forever, so she killed them before they could attain the age of accountability.  It actually made sense to do so according to her belief system.

In today’s America, under George W. Bush’s Faith Based initiatives, tax dollars are being given to many institutions which perform social services that were formerly done by government agencies; among these institutions are mental health facilities.

In a scenario that now must be acted out several times a year across America; a person is arrested, brought to trial and determined to have a mental disorder.  Subsequently the Christian Judge will remand that person to the custody of one of these faith-based mental health facilities.  There, they give this unfortunate person a book on demonology (the Bible) and tell them that every word in that book is true, and every supernatural being in it is real.  Then their release is only authorized under the approval of these people.  How crazy is that?  Our legal system is actually funneling American citizens into institutionalized religion, and only releasing them when their psychosis aligns with the teachings of that religion.

Imagine visiting a primitive tribe in the Amazon region of South America.  There the shaman tells you that you must give your vehicles to him or else the great Pintu of the Forest will come and take your mojo to Sayahn which will turn into a zombie.  You would laugh at him.  Even though you can’t technically prove that none of those things exist, he certainly hasn’t carried his burden of proof, and you wouldn’t turn your valuable equipment over to him without some pretty serious evidence.  However, when it comes to your own religion, you give your own version of this a complete pass!

Think about all the times you have heard a preacher say something like: “You are guilty of sin, and your soul is doomed to spend eternity in Hell, so you must seek salvation through Jesus Christ* so that it can avoid the fires of Hell, and live forever in heaven”.  You blithely let all of those underlined words go by without challenge, even though they have never been demonstrated to actually exist.    Not only that, but you give your hard-earned money to him, trust him with your children and do many of the things that he asks of you.  We have to start demanding evidence wherever we encounter claims of the supernatural.

In the future, when someone mentions heaven, or hell, or sin, you might ask them how they know those things actually exist.  You might also ask them why Muslims or Hindus are not worried about their hell, and why they aren’t afraid of going to some other religion’s hell.  Don’t accept “I feel it in my heart!” or other emotional hooks. Demand real, tangible evidence.  Don’t accept the Bible as proof of them either; all holy books are true if they only rely on self-reference to prove them so.