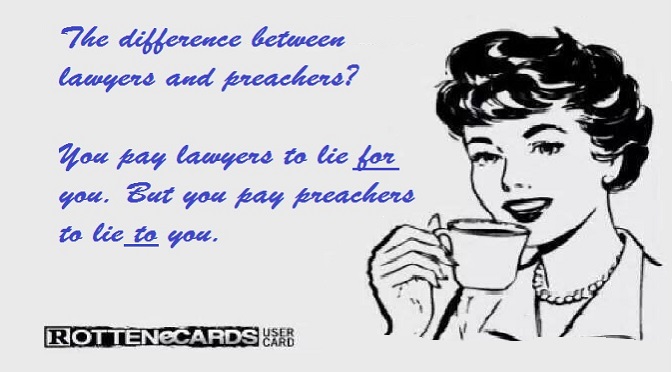 One of my pet peeves is when I come across articles by religious leaders who pretend to know how atheists become atheists. They misrepresent the process either through ignorance, or malice.  It’s not easy to tell which, because they are trying to “frame” the subject for people who themselves are ignorant about it; but are they packaging it for them in their terms, or are they just clueless themselves?

In his article “Atheism: An Objective Review”, Dr.  Peregrino Brimah claims that people come to atheism due to unanswered prayers, or because they are disappointed in god, or blame him for some physical or mental injury or disability.

It’s the old, “Why are you mad at god?” question.  Because of their religious mind-set which says everybody believes in god they can make all kinds of excuses for a person turning their back on god as one would turn their back on a friend, a parent or a public figure. They just can’t seem to grasp the fact that atheists actually come to their lack of belief because they finally understand that there is no god there to believe in, and that the many claims of Christianity (and other religions) just don’t hold water.  It seems impossible for them to conceive of people for whom god is simply not there.

It would be impossible to blame someone who doesn’t exist for doing harm to you. Could you blame Poseidon for letting your mother die when you don’t believe in him? We simply don’t believe that God is there any more than Santa Claus is there, or the Sandman is there.  He doesn’t exist, period.  We can’t make it any clearer than that.

However, the problem is that instead of actually asking an atheist why they don’t believe, people will go to their religious leaders for answers. The false reasons that preachers attribute to atheists for their non-belief are called “Straw man arguments”, i.e. that they misrepresent someone’s argument or position because the misrepresented argument is easier to dismantle.  Preachers and Christian Apologists can’t successfully refute the actual reasons that someone might come to non-belief, so they create false-arguments and present them to their flock as easily refutable (although false) claims by atheists.

An example of one straw man argument is:

This is a straw man argument because it misrepresents what atheism is.   Atheism is a term that pertains to belief, not knowledge.  The above statement says, incorrectly, that Atheists claim that they know that god does not exist.  Claiming knowledge that God doesn’t exist makes one a Gnostic, since the person is making a positive knowledge claim, not a belief claim. Personally, I’m an Agnostic Atheist:  I don’t know (agnostic) that there aren’t any gods, but I don’t believe (atheist) in any.

I assume the person making the above straw man argument hasn’t examined the entire universe for UFOs, Bigfoot, leprechauns or fairies, but you don’t have to search the entire universe before claiming to not believe in them; especially since there has never been any convincing evidence for their existence.  It’s the same with god.

Oprah Winfrey recently interviewed Diana Nyad, the 64 year old marathon swimmer who recently swam from Cuba to Florida. Nyad said that she was an atheist and was in awe of the universe and humanity. “Well, I don’t call you an atheist then,” Winfrey said. “I think if you believe in the awe and the wonder and the mystery, then that is what God is.” Because of the straw man concept of atheism that Oprah had in her mind, one that said that atheists can’t feel awe and wonder, she essentially called her guest a liar.

Again, the straw man argument that Oprah labors under is that Atheists are somehow less than human.  If someone had asked Oprah before the show if awe and wonder were attributes that all humans shared, she I assume would have said yes.  But when presented with a person who said she doesn’t believe in god but still felt awe, they had to be lying.

If you want to know what an atheist is ask us!  We’re human and are quite capable of expressing ourselves on the subject.  If you don’t know an atheist personally, then get online and read what they post.  You can read actual atheist de-conversion testimonies at PositiveAtheism.org or Ex-Christian.net. If you want to know more about logical fallacies, and how to construct a logical argument, go to http://infidels.org/library/modern/mathew/logic.html.