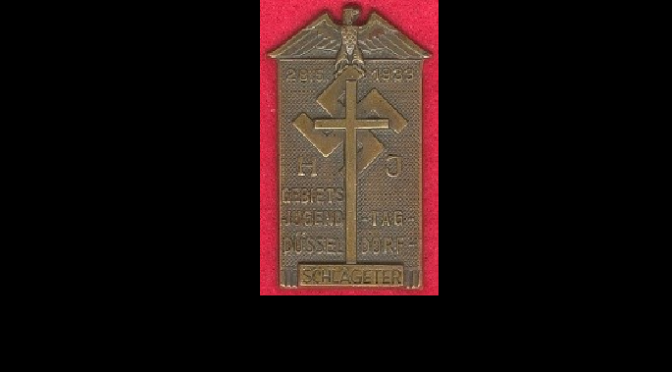 I am so tired of Christians blaming the Holocaust on atheists.  Besides being a lie, it hits much closer to home for Christianity.  Hitler was a life-long Catholic, and atheists were among the people that he persecuted.  Hitler himself told one of his generals, Gerhard Engel, in 1941 “I am now as before a Catholic and will always remain so,”, and in a speech delivered in Berlin, October 24, 1933, he said “We were convinced that the people needs and requires this faith. We have therefore undertaken the fight against the atheistic movement, and that not merely with a few theoretical declarations: we have stamped it out.”

In this article, I intend to draw a direct line from the Christian New Testament teachings, to the anti-Semitism that led to the Holocaust.  That is, I’m going to show that one of the core teachings of Christianity directly brought about the events that led not only to thousands of years of persecution of the Jewish people, but eventually led to Hitler killing millions of them in the Holocaust.

Let’s start with the foundational book of Christianity, the New Testament; where we see that it teaches that the Jewish people are directly to blame for killing Jesus.  In Matthew, verse 27:25, it says that the Jewish leaders actually told Pilate to “let his blood be on our heads”.  However, it was written decades after the event and early Christian writers could very well have fabricated those words with an eye toward promoting their new religion while vilifying the Jewish religion that they were trying to distance themselves from.  (Religious scholars will tell you that nobody knows who actually wrote the book of Matthew, or indeed, any of the books of the Bible.)

Jews have been persecuted throughout the ages as a direct result of this passage.  As Todd Baker, Th.M of Levitt.com says:

“… it can be said without fear of exaggeration that the devastation imposed and inflicted on the Jewish people by the Church’s anti-Jewish reading of Matthew 27:25 has shed oceans of Jewish blood issuing into a ceaseless stream of misery and desolation that horribly culminated in Hitler’s Holocaust.”

On the Website: Protestants for the Common Good (now @ http://www.communityrenewalsociety.org/policy):  Jay Wilcoxen said in MATTHEW: Gospel for a Teaching Church:

“Nevertheless, this vicious saying at the trial echoed down the centuries to bring untold misery, injustice, and slaughter to Jewish people at the hands of triumphant Christian fanatics. It doesn’t matter whether the report in Matthew is accurate or not. From any viewpoint, the curse should have been over by the year 73, and the gospel should have gone forward with justice (righteousness) rather than hatred.”

This anti-Jewish sentiment found a very vocal representative in a German religious leader, and the Father of Christian Protestantism, Martin Luther.  His vicious anti-Semitic views were expounded in his 65,000 word book, “The Jews and their Lies“.  In it, he graphically paints a very dark and bloody picture of what should be done with the Jews.  Here are just a few excerpts from it:

“What shall we Christians do now with this depraved and damned people of the Jews? … I will give my faithful advice: First, that one should set fire to their synagogues… Then that one should also break down and destroy their houses… That one should drive them out the country. “
Martin Luther, On the Jews and Their Lies

“We are at fault for not slaying them” [the Jews]
Martin Luther, On the Jews and Their Lies

“What shall we do with…the Jews?…
I advise that all their prayer books and Talmudic writings… are to be taken from them.
I advise that safe-conduct on the highways be abolished completely for the Jews.
I advise that their rabbis be forbidden to teach on pain of loss of life and limb.
…set fire to their synagogues or schools and bury and cover with dirt whatever will not burn, so that no man will ever again see a stone or cinder of them.
…their homes also should be razed and destroyed.”
Martin Luther, On the Jews and Their Lies

“They [rulers]must act like a good physician who, when gangrene has set in proceeds without mercy to cut, saw, and burn flesh, veins, bone, and marrow. Such a procedure must also be followed in this instance. Burn down their synagogues, forbid all that I enumerated earlier, force them to work, and deal harshly with them, as Moses did… If this does not help we must drive them out like mad dogs.”
Martin Luther, On the Jews and Their Lies

Outside of that book, he also said:

“Their synagogues … should be set on fire.” and “Their homes should be broken down and destroyed. They ought to be put under one roof or in a stable, like Gypsies, in order that they may realize that they … are … but miserable captives.”
“They should be deprived of their prayerbooks and Talmuds.”
“Their rabbis must be forbidden under threat of death to teach anymore.”

When asked what he would do if a Jew asked him to baptize him?  Luther answered: “I would take him on to the bridge, tie a stone around his neck, and hurl him into the river”

It is not hard to see that Hitler’s opinions of the Jews were based on the preceding centuries of Christian anti-Semitism as exemplified by Martin Luther’s works.  Daphne M. Olsen outlines this in her Doctoral thesis “Luther and Hitler: A Linear Connection between Martin Luther and Adolf Hitler’s Anti-Semitism with a Nationalistic Foundation” (2012):

“Anti-Semitism has its origins as early as paganism, even before the existence of Christianity; however, the roots of Christian anti-Semitism lie in the belief that the Jews killed Christ, the divine Savior.’ This belief made the Jews the enemy of Christians, causing a hatred that has lasted centuries. Two of the most notoriously unshakable Anti-Semitics were the Protestant reformer Martin Luther and German Chancellor-turned dictator Adolf Hitler.”

William Nicholls says in his book “Christian Anti-Semitism: A History of Hate”:

Hitler used the widespread historical Christian-inspired hatred of the Jewish people as a uniting force to solidify his power.  In 1925, Hitler said in Mein Kampf,   “The art of leadership… consists in consolidating the attention of the people against a single adversary and taking care that nothing will split up that attention.”   – Vol. 1, Ch. 3;

And in a Nazi Christmas celebration in 1926, he said that: “Christ was the greatest early fighter in the battle against the world enemy, the Jews … The work that Christ started but could not finish, I — Adolf Hitler — will conclude.”

In a 1936 speech before the Reichstag, he famously said, “I believe today that I am acting in the sense of the Almighty Creator. By warding off the Jews I am fighting for the Lord’s work.”

From this it is apparent that he used the popular Lutheran view that Jews were evil Jesus killers to rally support during his rise to power. After centuries of Catholic training, Hitler found a population ready to receive his antipathy for those people.  Not once did the Roman Catholic Church indicate that Hitler was acting against Church wishes, and indeed, every year of the war they made sure to celebrate Hitler’s birthday.

The Church never ex-communicated him for any of the atrocities that he instigated.  Think of all the petty reasons that you’ve heard for people being ex-communicated from the Catholic Church; but apparently killing millions of Jews (along with Homosexuals, atheists, gypsies, cripples and retarded people) will not do it.  All told, it is estimated that the Nazis killed over 11 million people, (and that’s not counting all the soldiers who died fighting against the Nazi war machine) but as far as the church was concerned, he was an upstanding Catholic to the day he died.

And yet, when Christians talk about the problems that Atheists caused in the world, they usually list 3.  The purges of Stalin, the genocides of Mao and Pol-pot, and Hitler’s Holocaust.  (They sometimes they erroneously throw in N. Korea.)

To address each one briefly:

Stalin was clergy-trained, power-hungry dictator who created a substitute religion in “Stalin-worship” during his dictatorship.  What he did was not in the name of, nor justified by, atheism.  Christopher Hitchens put it like this:

“For hundreds of years, millions of Russians had been told the head of state should be a man close to God, the czar, who was head of the Russian Orthodox Church as well as absolute despot.  If you’re Stalin, you shouldn’t be in the dictatorship business if you can’t exploit the pool of servility and docility that’s ready-made for you.”

Pol-pot was also an evil dictator, who caused much death and suffering, but his agenda was driven by a brand of ruthless communism that simply had atheism as one of its political planks.  However, and again, what he did was not in the name of, nor justified by, atheism per se.

The N. Korean dictatorships are anything but atheistic.  In North Korea, Kim Jung-un, and his father, and his father, are ALL considered gods; their government is actually a necro-cracy; that is, their president is a dead man.  North Korea’s long dead founder, Kim Il Sung is still referred to as their Eternal President and worshipped as a god. Atheists, by definition, don’t believe in gods.

The Holocaust?  Sorry, but it can be seen that that was very much caused by the direct teachings of Christianity, and atheists (and atheism) were as much a victim as any other group.