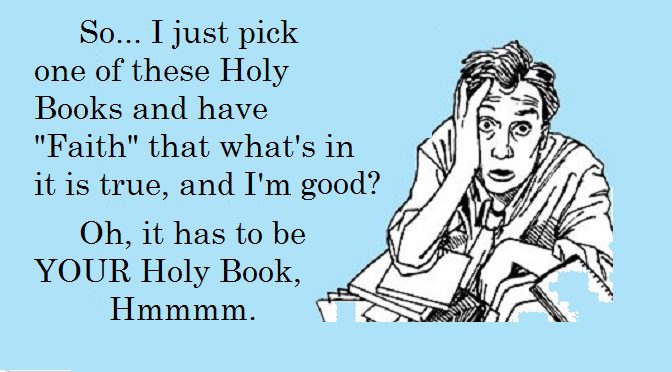 Many times, talking to Christians, you’ll hear them say that Jesus is the Answer; often when you haven’t even asked them a question.  When the subject of Evolution comes up, you’ll ask them how they think Humans arrived on this planet, they’ll simply say “God”.  However, when you tell them that god isn’t an answer because it brings up more questions than it answers, they give you that deer-in-the-headlights look and say “Huh”?

I believe it’s because they were brought up believing in one particular god, of one particular sect of religion, and have not taken the time or effort to look at the big picture.  They don’t see that people all over the world worship a thousand gods just as strongly as they worship theirs; some even willing to kill or die for theirs (and that’s not counting those that killed or died for the thousands of gods that were worshipped throughout history).  So that’s the first question that has to be answered:  “Which god?”   Say this to them though, and you get yet another “deer” look.

However, if you try to solve a mystery by appealing to a bigger mystery, you have solved nothing and explained nothing. There are hundreds of more questions about their god that are just begging to be answered.  Where did this god come from?  Does it have parents?  Are the parents still around?  Does it have a gender?  How long has he/she/it been around?  Is there a race of these gods?  Where do they live?  Why can’t we see them?  Are they all in this universe are do they all have their own universe(s)?  How did they create the Universe?  Why did they create this particular Universe? Why did they make most of the universe deadly to humans if people are so important to them?  Why did they wait so long (14 billion years) before even adding people to it?  Where is Heaven and Hell?  Are there other places where souls can go after death?  It goes on, and on.  “God” begs hundreds, if not thousands, of questions.

These questions never seem to enter their minds.  It may be because they were dealt with at a very early age.  Any parent knows you have to answer all kinds of questions about god from pre-school children; and these were handled at that stage.  By the time they’re ready for school they have a pretty good idea of what their particular god’s characteristics are (and many times he looks, sounds and acts a lot like Santa Claus).  (If you think about it, Yahweh looks a lot like Santa to adults too.)

What about the older, more philosophical questions that have been with us for a long time.  Why did god let evil enter the world?  Why does god allow sickness?  Why does god let bad things happen to good people?  Why does god hide?

One of the biggest questions about god was put forward by Socrates: “Do the gods love good action because it is good, or is good action good because it is loved by the gods?”   Called the Euthyphro dilemma, I can be put another way: “Does god create morality, or does he just pass that information along to us?”  If the gods create morality then whatever they say is good, is good and they could change their minds tomorrow. But if good exists aside from god and he just passes it along, then god is just a messenger and we could, theoretically, figure it out ourselves without him.

Apparently the God of the Christian Bible, Yahweh, decided to change his behavior (and His definition of good) with the New Testament.  What if he decided tomorrow to go back to his “old self?” and put out a third (a Newer) testament that demanded we keep slaves again?  What if He said that instead of foreskins, we had to cut off our little fingers?  Or our noses, in order to keep the sin of pride at bay?  Or what if he said that we had to keep no less than 3 wives at all times?   Would that now be “good”?

God is not an answer, it is a question.  It is a thousand questions.  All religions say they have answered those questions but all they put forward is conflicting evidence in the shape of their holy books;  i.e. anecdotal evidence from uneducated, pre-scientific people, who thought that demons cause illness, and that curses and magic were real (and in the case of Christianity, that witches and gays should be hunted down and killed).

The only method that we have to get real, actual answers about the universe is science.  In the unlikely event that a claim of religion was to be shown to be true, it would have to be confirmed so by science; and so far, those examples have been rare indeed.

7 thoughts on “God is not an Answer. It’s a thousand more questions.”