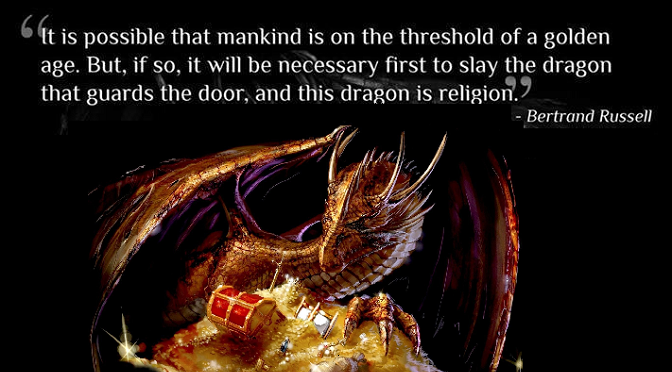 So, a close relative or loved one has told you that they no longer believe in god, and have left the religion you once shared.

“What do you have against religion?” You might ask, “Why not just live and let live? Religion gives so many people hope for the future, and it’s not hurting anyone.”

However, they know better or they wouldn’t have started questioning their beliefs in the first place, nor would they have bothered to come out of the “atheist closet” to you.

The main reason that religion is a problem is that it causes great harm the world over, and has for millennia.

But you want details of that harm. So let’s start with the most obvious: physical violence, defense of slavery and cruelty in the name of religion.

1) Religion is very divisive. It splits all of humanity into warring factions. Religious beliefs were the cause of and/or the justification for:

Also, religion is historically responsible for:

2) The Suppression of science, and indeed the suppression of reason itself. “Thinking” is frowned upon in religion, even from the beginning. “Original sin” itself comes from Man eating from the “Tree of Knowledge.”

3) Religion teaches us that the Earth is put here for our disposal. We can use it up or trash it and it’s Ok. Jesus is coming back shortly to put an end to it anyway, right?

4) Religion teaches us that we are all born tainted with sin; impure and dirty. We must spend our entire lives trying to make up for the sins of the first humans.

5) Religion tends to kill our natural curiosity. It teaches us to be satisfied with ignorance; with not knowing. When religious leaders give us pat answers all of our questions, our curiosity atrophies. We simply believe that we HAVE all the answers, when we don’t.

6) Religion stymies the wonder of nature. It’s not nature and its processes that are wonderful when we give a god all the credit for creating it with the snap of his fingers.

7) Further, religion teaches us that the study of certain areas of nature are off-limits. For example:

8) Religion redirects hundreds of billions of dollars and man-hours away from many potentially more productive pursuits.

9) Religious belief is directly responsible for the bilking of billions of dollars from the old and infirm by televangelists and faith healers.

10) Religion teaches that morality is rigid and unchanging, set in stone rather than subject to changing circumstances.

11) Religion’s supernatural foundation keeps millions, if not billions, of people in educational and cultural stagnation. If societies believe that they can find the answers to all of life’s questions in their holy books, why study anything else?

12) People pray rather than seek legitimate medical attention for illnesses for themselves and their children. Christian Science “prayer practitioners” are actually paid by insurance companies to pray for the recovery of the sick and infirm under their care, as opposed to actually giving them even minimal medical treatment.

13) Religion devalues this life, the only life we know we have, in the promise of a paradise after death. They tell you that your life on Earth is infinitesimally small compared to that which awaits you in heaven. So why even bother trying to do anything but praise God while we’re here on Earth?

14) Religion can’t be conducive to good mental health when it tells us that we have an all-powerful “judge of right and wrong” watching your every move and reading your every thought, ready to cast you into hell forever for the slightest infraction. You could easily see where this could lead directly to paranoia. Indeed, does this not define paranoia?

15) In war, religion teaches us that there is no reason to try to quickly end it, after all, God is on our side; and all the fallen soldiers are going to heaven anyway since they are fighting in a holy cause.

Wikipedia article on “Discrimination against Atheists:”

“In the United States, seven state constitutions officially include religious tests that would effectively prevent atheists from holding public office, and in some cases being a juror/witness, though these have not generally been enforced since the early nineteenth century.”

17) Blue Laws through which Religious people tell everyone ELSE they have to abide by the dictates of their religion or face legal consequences.

18) Religious entities put pressure on politicians to put “Under God” in our country’s pledge and “In God We Trust” on our money. This is a not-so-subtle attempt to control the attitudes of Americans, and represent America as a theocracy. IT IS NOT. It was founded as a secular country, and this type of action is directly against the spirit of the Constitution. The fact that we have spineless politicians and religious Supreme Court judges who will not acknowledge that, does not change this fact.

19) Religious people and organizations are currently involved in an on-going campaign to rewrite history. They wrongly claim that America is a “Christian country founded on Christian values,” when a cursory reading of actual letters written by the Founding Fathers would show that they we are largely deistic in their beliefs, and wanted to ensure that NO religion had control over the actions of the government of the United States. The “Creator” that the deist founders had in mind had no relation to the dictatorial megalomaniac of the Christian Bible. Under that god, there WERE no human rights.

20) Religious organizations practice thought control over their followers, stultifying their mental growth and inhibiting their natural sexual desires. They intentionally limit access to educational materials that would help the practitioner mature emotionally and intellectually. If you do some research on the indoctrination and control practices of cults, you’ll see the same types of manipulation devices used in mainstream churches, mosques and synagogues. They’re sexual taboos in particular are many and varied for no more reason than it offends some of the members who consider themselves “righteous”.

21) And finally, if we accept Religion’s version of human history, we are denying our own true history, the actual human story. Homo sapiens have endured for ~150,000 years, not 6,000. We have survived an Ice Age and have battled the Neanderthal for human supremacy of the planet. We have fought the mighty mammoth, the mastodon, and the saber-tooth tiger.  Even before Homo Sapiens, our pre-human forebears spent countless generations learning to make and use tools and harness the power of fire.  Christianity would have us deny all of that.

And in spite of this and in spite of being constantly plagued by superstition and religion, we have finally managed to develop reason and the scientific method to a finely honed tool for examining and explaining the universe around us. Religion would have us chuck out anything that we have learned that doesn’t conform to a 2,000-year-old text whose authors didn’t even know about germs.

9 thoughts on “What’s so wrong with religion anyway?”