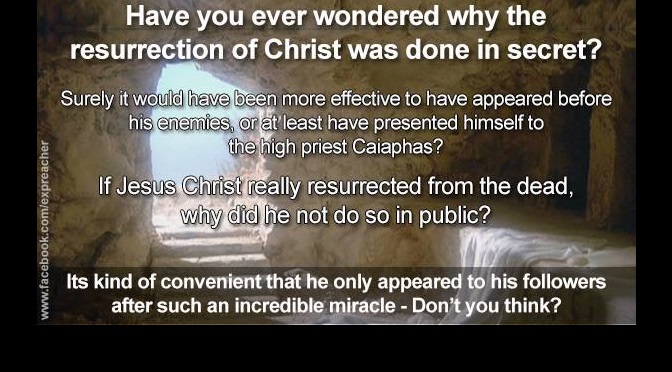 Of course they will quote the Bible as a source of information on this, but then I have to point out that that is only one book, written thousands of years ago, by very uneducated superstitious people at a time when there was no scientific-method and very little critical thought.   As such, the Bible really just is not evidence for such an extraordinary claim; and that which can be asserted without evidence, can be just as easily denied without evidence.

Are the stories in The Odyssey true?  It’s a really old book.  It’s actually older than the Bible.

What about the stories about dragons and magic of King Arthur and Merlin?  You must be aware that they are just embellishments on older folk stories that got retold so many times that many people eventually came to believe them to be true?

Christians, if you really believe that resurrection is possible, then do you believe all the other resurrections stories that supposedly happened throughout History?  Julius Ceasar, Augustus Ceasar, Apollonious of Tyana and Antinous, Jabbi Judah, Kabir and Sabbatai Sevi have all had resurrection stories told about them.

“A nineteenth-century Hindu guru named Lahiri Mahasaya died in 1895 and was cremated after reportedly telling his followers that he would rise again. Afterwards it was said that he appeared to three followers, each individually. These meetings were said to have been rather brief, occurring in three different cities at about the same time. It was also said that Mahasaya’s body appeared to be transfigured.” – Paramhansa Yogananda

A “Hindu guru named Sri Yukteswar died and was buried in 1936. One of his chief disciples, Paramhansa Yogananda, tells us that one week after seeing a vision of the Hindu avatar Krishna and more than three months after his master’s death, he witnessed a flesh and blood appearance of the dead Yukteswar while he was meditating. He reports that he touched his teacher’s body and then had a two-hour conversation with him, chiefly about the nature of the afterlife.” – Paramhansa Yogananda

And in 2001, A Christian Minister in Nigeria, Daniel Ekechukwu, supposedly died in a car accident and came back to life after two days, and is still alive today.

Then there are those that claim to be the reincarnated person of Jesus himself:  David Koresh, The Rev. Sun Myung Moon, Jim Jones, Marshall Applewhite, Alan John Miller and many, many more.

The members of those religious sects believe those stories to be just as true as you believe the Bible stories are. But you don’t believe their stories any more than you would believe UFO abductions, or Bigfoot sightings; and those should be more credible, theoretically, since they don’t involve supernatural phenomena.  However, any wild story of supernatural occurrences should not be credited with veracity until some very good evidence has been presented.

Rationally considered, resurrection and/or reincarnation are pretty outlandish claims.  Nobody in the history of the world has ever been scientifically demonstrated to have actually done it.  There is no mention of Jesus’ resurrection anywhere in historical documents outside of the bible.  (Although there are mentions of Jesus and early Christians, it’s plain that those were simply repeated from earlier stories passed down through many tellers.)

NOR is there any extra-biblical mention of any of the other supposed “resurrections” that took place on the same day that Jesus resurrected.    According to Matthew chapter 27:52-53

“And the graves were opened; and many bodies of the saints which slept arose, And came out of the graves after His resurrection, and went into the holy city, and appeared unto many.”

You would think that someone outside of the Bible would have written about that!

If you’d like to read more about the Jesus Resurrection story, and why it is extremely implausible according to the biblical account, then read Richard Carrier’s Why I don’t buy the Resurrection Story (2006)