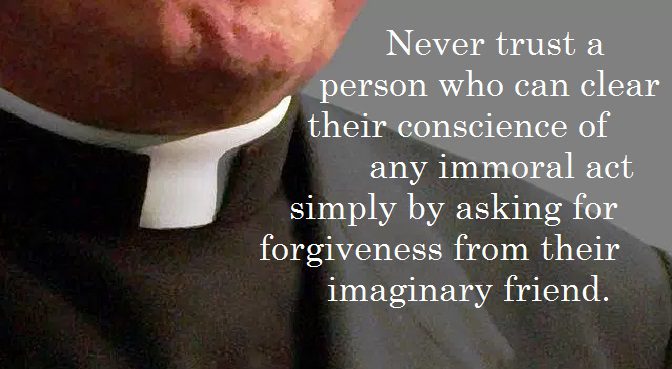 In the course of living your life you do things that cause harm to others.  By carelessness or by design, you hurt them, you wrong them or you cheat them. Eventually you regret your actions, and your conscience is bothering you.  What actions do you take to make things right and feel better about yourself?

Do you take the hard path and go to those you harm and ask their forgiveness?  Do you try to make it up to them, or try to repay the moneys that you cost them?  Or, as a Christian, do you go into your bedroom and kneel down and ask Jesus to forgive you?  Do you go to some priest and confess to them; and then count some rosaries as penance, or make a donation to the church?  Do you make a sacrifice and ask a god to forgive you, or maybe practice some other religious rite-of-atonement?

However, you’ll notice that these latter acts don’t actually do anything to right the wrong done, or include apologies or recompense to the victim of your “sin”.  Over time, you become so reinforced in this forgiveness ritual that you may actually consider this before-the-fact; which can make the harmful act easier to do in the future; knowing that you can get forgiveness with a few words to your religious authority figure (real or imagined).  However the harm is real and it accumulates in the world.

There is no easy out for us like there is for the Faithful who know they can just go on and commit the harm, and then be granted forgiveness by their church, or Jesus, or God, just for the asking.  They don’t even have to ask forgiveness from the person they’ve wronged.

Consider the members of crime syndicates.  How many heinous acts do they commit knowing that a few words to their priests, or pastors, and a few acts of contrition, will purify their soul so that they can continue to do what they’ve always done.

As non-believers, we either have to get forgiveness from the person we’ve wronged or live with it.  It’s not “sin” to us; that is, we’re not worried about offending an ever-watchful super-natural being that can punish us in the afterlife.  But it is real harm and we know that it has real consequences for that person, and for us, if we would have to live with that harm on our conscious.

When you think about this you’ll realize that we have to think a lot harder about any possibly immoral acts, and the harm that could result from them, than most religious people; and isn’t that the very basis for morality?  We know that we will have to live with the consequences of our actions.  The only forgiveness we can hope for is from the person that we have harmed; and we know that sometimes that forgiveness will not be forthcoming.

Did you know that Hitler was a Christian?  He was a Catholic. And according to Christian theology, since he probably asked for forgiveness in his last hours before death, he should be in heaven right now.  On the other hand, Anne Frank’s only “sin” was that she was Jewish, and as such, she wouldn’t have accepted Jesus as her “savior”.  So to Christians she should be in hell now; along with all the other Jews that the Nazis killed. God is supposed to be perfectly just.  Let me ask you; is this any kind of justice?  Or in any way moral?

Also, how can pushing your sins off onto an innocent be considered moral in any case?  How can anyone else possibly accept the responsibility for your actions?   How could you expect them to?  What court in the world would accept your death as payment for another person’s crimes?  There is no real logic there.  The court’s know this, but apparently the “One True Faiths” don’t.

2 thoughts on “Since Atheists can’t go to Jesus for forgiveness, what do they do?”