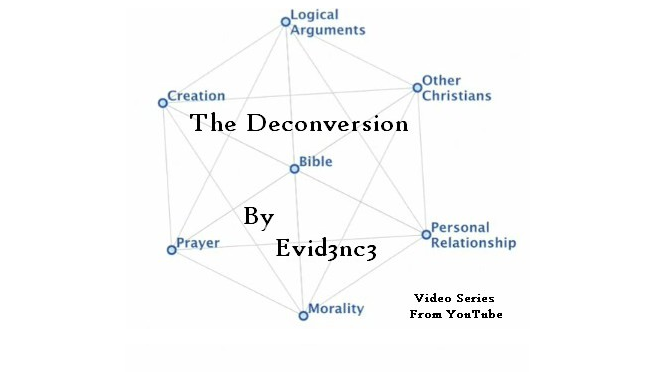 I’m a firm believer in having people write down their deconversion stories, i.e. the details of how they left supernatural beliefs behind and accepted reason, logic and physical reality as their foundation for life.  I recorded my deconversion in Chapter 9.  I feel it is important to pass these stories on to the next person who might be in the turmoil of transition in order to give them hope that their journey is not only a worthy one, but one that has been paved with the hardships of those who’ve gone before.

Having been committed to paper, they sometimes they make their way onto the internet.  One can find an archive of such stories at PositiveAtheism.org.  This site, along with Ex-Christian.net, has a lot to offer those who are struggling with faith and doubt, and their archive of de-conversion stories is not the least of these offerings.  I highly recommend it to those who are struggling.

When someone takes the time to put their story on video so that they are seen and heard talking about their experience, it is even more moving.  There is a YouTube channel devoted to such deconversion stories.  One of the best examples of this, and one that covers the most bases as far as untangling the web of belief, is Evid3nc3’s “Why I am no longer a Christian“.

His journey is a very honest and thought-provoking one.  His production values are high, and the story of his de-conversion is told step by step, with a very direct and logical flow that is easy to follow.  In it he talks about his struggle with each aspects of his Christian belief and handles each one in turn: The Bible, Prayer, Morality, Personal Relationships, Creation, Logical Arguments and other Christians; i.e. the entire network of beliefs that is so hard to break when one is entangled in it.  His story does take several videos (12) to tell, but it makes for enjoyable viewing, and is very edifying because he takes such care with each step of his journey.

For those who have recorded their deconversion, either in text, or audio, or video, thank you!  It positively helps those who follow to gain courage during their own journey.  And thanks Evid3nc3 especially, for taking the time and effort to make such an excellent resource available.