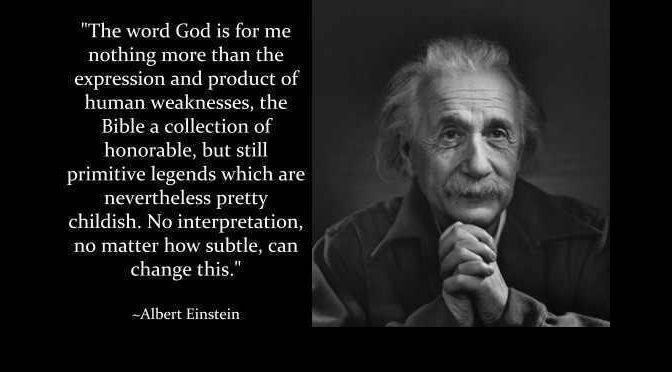 On Facebook recently, I saw a YouTube Video post by a Middle-Eastern Muslim about Einstein.  It came with the caption “albert einstein : god don’t created evil” (sic) and pictured Einstein as a young boy who questioned his teacher about the existence of god.  In classic apologetic style, the video presents the young Einstein confronting the typically rude professor to testify for the existence of God.  The payoff line (which of course shuts up the professor) is “Evil is the result of what happens when man does not have God in his heart”; a totally unsupported claim about god’s existence from a lad of about 8.

This insight, because it supposedly came from the incredibly smart Albert Einstein, is hijacked by this Muslim, apparently because it would carry much weight with the Infidels.

I am surprised that Muslims would resort quoting a Jewish boy to support their case, given their usual anti-Semitic slander. That’s a pretty big concession when you think about it, i.e. to give them credit for high thought. Could it be a measure of their level of desperation in defense of their religion? I’m sure it is only because of the high respect that the average person has for Einstein, and the fact that he was supporting their position on god’s existence, that they resorted to it at all.

When I was a child I believed as a child.  I even believed in Santa Claus, the Easter Bunny and the Tooth Fairy one one time.  However, like Einstein, when I grew up I realized that those beliefs were unfounded and not at all reasonable. The smallest examination into these claims resulted in their undoing.  And, like Einstein in his adulthood, I no longer believe in God.  When Einstein occasionally mentioned “god” in his talks, 1) he’s not talking about Jesus or Allah, he was after all, a Jew and 2) he was really just referring to Nature, or the universe.  He certainly did not believe in a “Personal” god; a god that has a will, or is involved in our lives in any way.

At one point in his life, Einstein prickled at the many lies that religious people told about his religious beliefs; claiming him among their believing-brethren (like the above mentioned Video). He famously said in a 1954 letter to an atheist friend. “It was, of course, a lie what you read about my religious convictions, a lie which is being systematically repeated. I do not believe in a personal God and I have never denied this but have expressed it clearly. If something is in me which can be called religious then it is the unbounded admiration for the structure of the world so far as our science can reveal it.” (Albert Einstein: The Human Side,, edited by Helen Dukas & Banesh Hoffman) How could he put it any plainer than that?

I know that the tenants of Islam give Muslims permission to lie if it is in defense of Islam (Taquiyya); but if you have to lie to protect your religion, is it really a religion worth protecting?