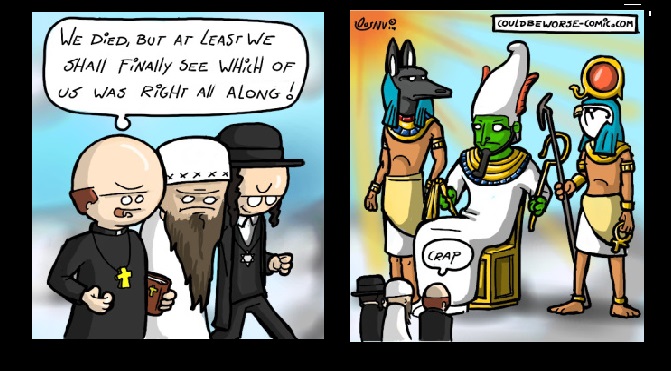 Let’s address an idea that believers have used to justify belief to non-believers for ages:  Pascal’s Wager.

Blaise Pascal was a 17th Century philosopher, mathematician and physicist.  He came up with a “wager” of sorts which recommends god-belief over non-belief.  Pascal’s Wager has been stated many ways, but most people state it thus: “Why don’t you believe in God anyway?  If He’s not real you haven’t lost anything, but if He is real, you get to go to heaven?  However, if He is real and you don’t believe, you‘ll spend eternity in Hell.”  Some refer to this as the “Fire Insurance” argument.

Atheists know that this argument fails for many reasons.  Here are 7 of them:

For example, if you’re a Christian, you have to believe that God is not only God, but He is also Jesus, and the Holy Spirit; an entity that impregnated his own mother and made it necessary to have himself killed in order to appease his own wrath over original sin.  His Hell (if it is real and we have souls that live forever) is very much to be feared.

But to Jews, God is the singular GOD, and to most Jewish people, there is no heaven or hell.  When you die, your life is over and you sleep with your ancestors.

To Mormons, God is one of many, many gods and a thing that they aspire to become themselves.  Their afterlife has no hell.

To Hindus, their gods are many, and their afterlives are actual human lives here on earth, in a higher or lower cast.  They eventually will reach a point of human perfection where, when they die, the will achieve Nirvana; a kind of Hindu Heaven.  Their hell is a place of punishment, but it’s only temporary.  They eventually return to a human life.

To a Buddhist, there is no god, since Buddha was not a God, and there’s no hell.  Their afterlives are other kinds of lives of a higher or lower order, here on earth.

These questions must be considered for a thousand different religions around the world.

And the real God, if one actually exists, could be a totally different God from what mankind has ever imagined.  And he might not even CARE if you believe in him or not.  And that god might not even have a place, good or bad, for you to go to after you die.

Pascal was a Christian, so it makes sense to a Christian.  But it doesn’t make sense to many other religious believers; or to atheists, pantheists or deists.

The second part of Pascal’s Wager says that if there is no God we wouldn’t lose anything by believing.  But that’s not the case is it?

Preachers would then demand that we also believe in heaven, hell, sin, resurrection, prophets, miracles, angels, Satan, demons, souls, etc.  And doing so would potentially put those preachers in a position of power over us, allowing them to dictate not only our beliefs, but our actions, including the way we dress, the way we educate our children, and what medical procedures we’re allowed to use.

Then, because of the “Great Commission” (Matthew 28:16-20) we would be expected to try to recruit new believers. And, in order to spread the “Good News”, we would first have to explain the Bad News: We would have to “sell” the idea that all of the people of the world are born with inherited sin, and are thus bound to spend an eternity in Hell unless they accept Jesus Christ into their “heart”, and fall in line with the church’s dogma.

Also, saying that we believe when we actually don’t, would cost us a great deal of self-respect by being intellectually dishonest with ourselves, our family and our friends for our whole life.  We would be living a lie.  If this is the only life we have, then dedicating your life to a false belief is a rather serious problem. We would have not only made a mistake, but we would be basing our entire life around this mistake.

There is also a lot of guilt, and stress associated with religious belief.  No person is perfect, but in the words of Christopher Hitchens.  “God creates us ill, and commands us to be well”.  That’s guilt every time you fail to live up to God’s expectation (and he has very high expectations), and that guilt causes stress.  That’s a lot of unnecessary stress to carry with you every day of your life.

In worse-case scenarios, accepting outlandish religious beliefs could result in you (or your children) being molested by priests, or bankrupting or killing yourself in some apocalyptic doomsday scenario, or even blowing yourself up in an attempt to kill infidels.

These are not fantastic results pulled out of the air to scare you.  Each and every one of the above is a well-documented result of extreme religious beliefs.  There are many other examples as well; Andrea Yates killed her five children in 2002 because she was afraid they might end up in Hell.  In 1978 parents fed poison drink to their children in Jonestown, Guyana before drinking it themselves.

So THINK.  Pascal’s wager was created to bring Christian fence-sitters back into the fold.  That’s it.  It doesn’t do anything for any other religion or for atheists who have to consider ALL of the religious claims of ALL the other religions as well as Christianity.  It’s really a dead-end logically.