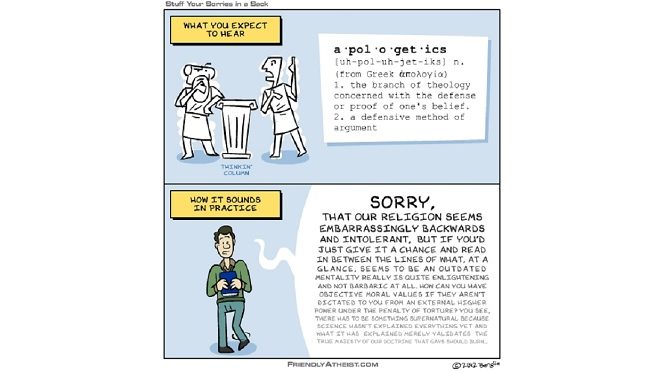 I’ve been reading James A. Lindsay’s new book God Doesn’t, We Do: Only Humans Can Solve Human Problems.  It’s an excellent book, and makes a very good case against belief in a God that doesn’t do anything, and religious faith in general.  I highly recommend it to thinkers of any philosophical or theological persuasion.

One of the very many valid points that he brings up in his book is that Christian Apologetics, i.e. the body of theology that aims to present a rational basis for Christianity, is wholly unnecessary.  He points out that most any Christian preacher, or for that matter any Christian lay person, will tell you that all you need do is have Faith in Jesus, and follow His teachings, to get to Heaven.  (Note:  I will capitalize Faith when speaking of religious faith).  You need no rational basis to believe.  Indeed, if you had a rational basis for belief, then you wouldn’t need Faith. Faith is belief that does not rest on logical proof or material evidence, and it seems to me that Christian Apologetics is a Faith-Killer.

However, it seems you can’t write or say ANYTHING that opposes Christian beliefs, or points out the awful stuff in the Bible, without some Christian apologist posting 5 paragraphs in its defense. They will use every kind of twisted logic they can put forward to explain why that bad thing in the bible is actually good, or why that self-evident contradiction isn’t really a contradiction at all!

For example, God orders Abraham to kill his only son.  No reason is given, but Abraham, dutifully takes his son to the mountain-side, trusses him up like a goat and prepares to kill, carve and burn him as the sacrifice that God wants.  (Remember that this is the same Abraham that positively worries God to distraction over how many good people it would take to save Sodom and Gomorrah; but here he simply jumps up and runs to kill his own son at god’s request.)

When this is presented to Christians as an example child-abuse, mental cruelty and authoritarian abuse of power, not to mention an example of an error in the bible as Isaac was not Abraham’s only son (he also had an older son named Ishmael), they start in on the apologetics.

As you might guess, there are entire websites devoted to apologetics. Once such website, the Christian Apologetics and Research Ministry’s for instance, claims that God knew that later on Jesus would use this as an example of absolute obedience where Abraham represented God, and Jesus represented the son, and Isaac’s sacrifice represents Jesus’ sacrifice for our sins, etc.  It goes on and on with a whole list of parallels and similarities.  But not only is all that a very tenuous reason for child abuse and mental cruelty (GOD couldn’t think of a better way to get his point across?), it’s all beside the point if all you need is Faith.

On this one website alone, you kind find reasoned defenses (apologetics) for dozens, if not hundreds, of problems with the Bible. They address the Flood, fossils, God’s treatment of Job on a bet with Satan and the contradictions in the Bible (“John 1:18 “No one has seen God at any time”, but Exodus 6:2-3 says that Abraham, Isaac and Jacob all reportedly saw him), and many more Biblical problems.  However, nowhere in the Bible does it say that you have to have logic and reason to justify your belief in Jesus, or God.

Want to go to heaven? Have Faith, it says.  Even if you believe that works will get you into heaven (and there are Christian sects that believe that); you still have to have Faith that what the Bible says about works is true.  Neither reason, nor works however, are Faith.  Apologetics try to support Faith with reason, and that’s a no-no.  Ben Franklin agreed, and said that “The way to see by faith, is to shut the eye of reason.” Even the great Protestant reformer Martin Luther called reason the “That Great Whore”, and said it should be shunned.

James A. Lindsay, in his book, says that the very existence of Apologetics proves that Faith is not enough.  He asks:

“Why, then, are there apologists?  Why does anyone bother, via complicated philosophical arguments and gymnastic contortions to language and ideas, to try to prove that there is a god, usually God?  Such arguments seem to be a waste of time.  Consider the fact that not only is it the view of many believers, it is a scripturally supported viewpoint that faith is the centerpiece of religious belief.  In the Christian tradition, Jesus purportedly tied the matter up nicely, in fact, by explaining that the most blessed are those who believe but do not see.  Still, from times immemorial Christian apologists have tried to justify the bases for their faiths to skeptics and credulous alike.

“Because we are less superstitious today, faith is simply not enough for most Christians to believe.  This statement is proved by the tens of millions of words written and spoken by apologists over the centuries, words that have become increasingly and repeatedly embarrassed religious attempts to talk about reality.

It’s time we left the verbal gymnastics of Christian apologetics behind.  Those who are not believers don’t accept them anyway, and those that do believe, purportedly don’t need them.  It’s just embarrassing to try to put reasonable excuses to unreasonable acts, biblical contradictions and preposterous stories.

So, without apologetics, you are left with Faith.  Endorsed by Jesus Himself, Faith is your only means of achieving your eternal home in Heaven.  However, Religion in general is in for a rough time if “faith is simply not enough for most Christians to believe”.   And even if it were enough (it’s not, as I show in my article “Faith, as an Epistemology, fails miserably”), Faith has its own problems.