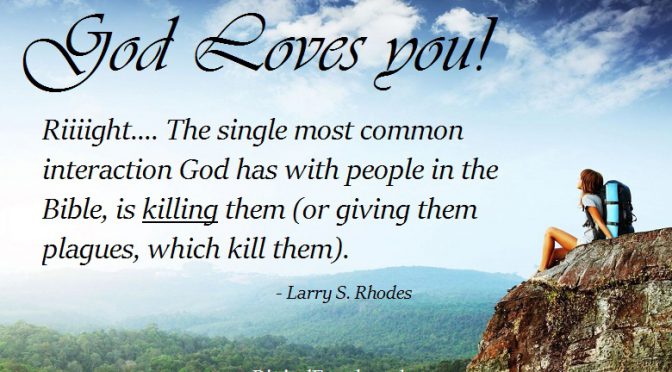 One of the most persistent ideas that exists among believers is this idea that God is a loving parent figure; i.e., that “God is love”.  Moreover, that he cares more about you than any human parent ever loved their child.  Frankly this is ridiculous.  Reading the Bible, we can easily see that this claim is ludicrous beyond imagining.

Talk to any believer, and they will insist that their holy book is god’s word, either dictated directly to His prophets, or “inspired” in such a way that we should be able to get a good idea of what God is like, and what he wants.  However, any casual reading of that text will demonstrate that the ONLY thing that god wants from us is obedience, at the cost of our lives if we fail.  And the punishment doesn’t stop at death; after death you will then forced to live on and endure unimaginable torture that literally never ends.

The Old Testament is filled with instance after instance of God’s dictatorial callousness towards his human creations. Starting with the cursing of Adam and Eve, and all of their descendants for all of time, and then moving through every book from then on; sending fire and brimstone, plagues, armies, floods and so on.  He uses every means imaginable to kill us, and/or to make us suffer.

In Exodus, before he supposedly led the slaves out of Egypt, He hardened Pharaoh’s heart so that he wouldn’t let His people go. (Exodus 9:12) Why would he do that?  Apparently it’s so that he could be justified in unleashing his plagues on Egypt, ending thousands of innocent human lives, along with the first born of all Egyptian families.  God is love?  Please…

When Pharaoh finally did free His people, and he led them out into the desert, does God lead them straight to the Promised Land? ( A trip which would take them about 2-3 weeks.)  No, he leads them in circles, out in the desert, for 40 years.  40 YEARS!  Then, He only brings them in sight of the Promised Land when Moses is about to die. Would ANY loving parent do something so heinous?

When the God-of-love brings his people into the promised land, does he tell them to assimilate with the populations? Does he tell them to follow their customs, and learn to live in peace with them?  No, He admonishes them to wage war on all of the peoples of the new land. “1 When the Lord your God brings you to the land that you are going to occupy and force out the many nations before you – Hittites, Girgashites, Amorites, Canaanites, Perizzites, Hivites, and Jebusites, seven nations more numerous and powerful than you. 2 And when the LORD thy God shall deliver them before thee; thou shalt smite them, and utterly destroy them; thou shalt make no covenant with them, nor shew mercy unto them:” (Deuteronomy 7:1 -2).  No love here.

When God floods the earth, it’s because mankind had grown evil. Really?  Everyone?  Every man, woman, child and baby?  AND all of the animals?  Why couldn’t he just have snapped his fingers and blinked the evil ones out of existence?  It’s certainly within the power of an omnipotent being.  But apparently he would rather drown every single living thing on the planet, save one “righteous” family.  Love?  Doesn’t sound like it?

And no conceivable punishment is left out.  God has reserved a special punishment for us in Deuteronomy 28:53-58, which says that if we don’t obey God’s commandments, God will bring us so low that we will have to eat our own children to survive:

And remember, there are 613 commandments in the Bible, not just 10.

Even in the New Testament, Jesus, the meek and mild, relates a story where he compares himself to a king who says “But those of mine enemies, which would not that I should reign over them, bring hither, and slay them before me.”  Most of the things Jesus says in the NT are actually demands for obedience; and in this case it’s plainly obedience or death.  What kind of love is that?

Apart from demanding the death of those that don’t follow him, Jesus at one point, positively tells his disciples in Luke 14:25-26, that you have to hate your family to be his follower:  “25 And there went great multitudes with him: and he turned, and said unto them, 26 If any man come to me, and hate not his father, and mother, and wife, and children, and brethren, and sisters, yea, and his own life also, he cannot be my disciple.”  This is the kind of thing that you would hear from a cult leader;  i.e. if your family doesn’t join the cult with you, then you have to leave them, but he goes even farther to say that you have to hate them as well.

That “God is Love” is plainly laughable; even when using today’s examples.  How often do you hear Christians say “Jesus was looking out for that lady?  She was a good Christian, so she didn’t die in that car crash!”  But, by their own admission, since god is responsible for all things (especially life and death), God used the car crash to kill the rest of the victims, and just didn’t get that last one.    No mention is ever made of them, except by inference that they must not have been good Christians; which promotes a blame-the-victim mentality.

Parents today tell their children that because of God’s infinite love, God (or Jesus, or an angel) is looking out for them; but then terrible things still happen to them anyway; sometimes at the hands of the very people who are supposed to represent God on earth!  This callousness on the side of God was, in my opinion, best put by Tracy Harris of the Atheist-Experience  out of Austin, TX, when she said “If I could stop a person from raping a child, I would.  That’s the difference between me and your god.”  And NO, a murder/rapist’s free-will is NOT more important that a person’s life, or a child’s innocence.

Of course all of this makes perfect sense when you realize there is no god, and that the Bible is a book actually written to demand obedience, not to a god, but to a non-existent god’s self-appointed human representatives.

Throughout time, there has been no lack of examples of man’s cruelty to his fellow man when driven by religion. The Crusades, the Inquisition, the crimes of the Mormon migration to Utah, Jonestown, Guyana, and a multitude of other wars and religious atrocities, shows that man will not stop at ANY demand for obedience since it means riches and power for those they can dupe others into obeying them.

Please, examine your beliefs closely.  If you haven’t read the Bible, do it now. Or the Quran, or the Torah.  (Yes, this is an Atheist telling you to read your Holy Book.)  But don’t gloss over these examples of callousness towards humans.  Keep your mind on the fact that God is supposed to be all loving (or indeed “Love” itself).   I seriously doubt you’ll come away strengthened in your faith.