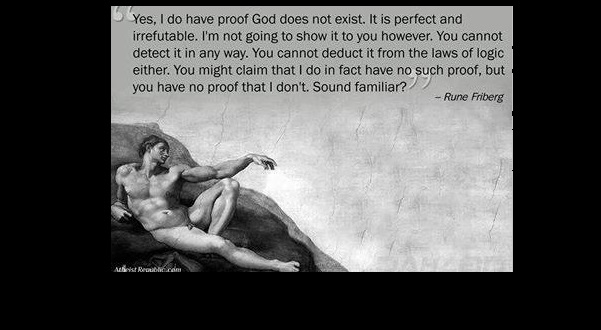 Christians send missionaries to every corner of the world, telling people of their God and their savior. They expound on every detail of the Old and the New Testaments; telling stories of fiery, talking bushes, parted seas, global floods with a huge animal filled boat, virgin births, and people rising from the dead.

Then, when somebody says “Sorry, I don’t believe that god is real.” they say “Well then, prove he doesn’t exist!” as though that settles it!  Proof has to be provided by the one making the claims, else why should anyone in the world believe their stories.

If you were to tell me that you got a puppy yesterday it wouldn’t be unreasonable for me to believe you. I know that puppies exist, and that people get them as pets all the time.

However, if you said you got a pet dragon yesterday, then I would have every right to ask for some very good evidence to support it; especially if you were also asking me to run into a burning building to rescue it. There would be a definite cost to my believing that your dragon is real. In the case of God, the cost would be my obedience to the church, the tithing, the hours of my valuable time spent in church, as well as the reevaluation of my entire worldview.

If someone comes up to you and says they were abducted last night by UFO’s, and you express disbelief. You wouldn’t expect him to then say “You have to believe me, you can’t prove me wrong!” But this is exactly the attitude that believers take when someone says they don’t believe their stories about a super-sky-being and life-after-death eternal happiness.

Christians, Hindus, Muslims, et al., make the extraordinary claim that they know how the universe was created; that it was created by their personal God, that that God still exists AND is personally involved in every part of our lives.

“Seems to me, Christians take their Bible, declare it an objective source for truth, and then expect the rest of us to buy into it.”  – ProfMTH, YouTube Atheist

Atheists withhold belief of god because there is no evidence for god.  The time to believe something is when the evidence presents itself.  No evidence, no belief.  And in the case of gods, the claims are extreme: miracles, creation of the universe, omnipotence, omniscience, omnipresence, etc.  Extraordinary claims require extraordinary evidence; and no convincing evidence, extraordinary or otherwise, has ever been presented for the existence in a god.

Consider the Inquisition.  Why didn’t the Bishops and other clergymen just bring the non-believers and heretics in and use evidence to convince them that God was real, and Jesus was the resurrected savior?  That they didn’t, and that they had to resort to torture and murder to get heretics to acquiesce to their demands to profess belief, demonstrates that no such evidence exists; for if any such evidence existed surely the church would have it.

We, as atheists, don’t make any positive claims about god, or an afterlife. We simply say we don’t believe your claims. The burden of proof is on the one making the claim, and until this time, no one has offered anything more substantial than 2,000 year old stories, personal accounts and “heart-felt” assurances; hardly concrete evidence.

Jesus says in the bible that if you have the faith of a mustard-seed, you could move a mountain. That would be evidence of something supernatural going on. Yet there has never been a verifiable instance of any mountain moving at any time. Why aren’t mountains moving all over the place? Has there never been one person of faith willing to put this to the test? In 2,000 years?

There is a quote that is making its round on the internet, it goes like this: “I’ve never seen faith move a mountain, but I have seen what it can do to skyscrapers”; and this about sums it up.  Faith does move some things: it moves people. And they, believing that they are doing god’s will, will stop at nothing to move heaven and earth to do what they perceive is God’s will. But that proves nothing more than the power of stories when they are believed to be true.

Often believers will ask me, “What would it take to convince you that God is real?” I really don’t know, but I have to agree with Matt Dillahunty of the Atheist-Experience, of Austin, Texas, when he says “I don’t know, but God would.” His point is that if God is real and omniscient like everyone claims, then He would know exactly what it would take to convince me. Yet, here I remain, an atheist. Apparently, He can’t take the time to give me that proof and help me avoid Hell.

Realistically speaking, I would say that if a disembodied voice called me outside one clear night, and I watched as the stars rearranged themselves to read “I am Jehovah, Yahweh, the one god, father of Jesus, and Jesus Himself”. It would be pretty convincing. However, I couldn’t be absolutely sure of it, because I could be dreaming, or someone could have slipped LSD into my cocoa, or I might have a brain tumor that is exerting pressure on a portion of my brain that causes auditory and visual hallucinations.

I will say that if I did receive convincing evidence that God was real, I would change my mind.  I’m not closed-minded, nor am I stupid.  I would bow to the evidence if it were presented to me in such a way that it was undeniably true.

However, when I turn the question around and ask the believer, they invariably say “NO, nothing could ever convince me that God isn’t real”.  In that case, I would have to drop the argument, because it would be futile. That person would obviously be laboring under a strong delusion, and further conversation on the subject would be a waste of breath.

Generally, this would be when the Christian would use their ace-in-the-hole: Fear … “If you DON’T believe it,” they say, “you’ll burn in Hell for an ETERNITY! You’d BETTER damn-well believe it.  Besides, Jesus loves you and would HATE it if you forced him to do that!”

Yes, you would force the most powerful being in the universe to torture you forever.  The being that makes all the rules, and can do anything He wants without fear of repercussions; the God who loves you more than any parent ever loved a child. This God of love will be compelled, teary-eyed and grieving, to have you thrown into a pit of fire and never, ever stop burning you.  Further, this is not a remedial punishment, not a “teach you a lesson” punishment; but a punishment meant to just cause you extreme, searing, moment-to-moment pain for all of eternity.  All because He didn’t provide enough evidence of His own existence to convince a rational person to believe He exists.

However, when it comes down to it, disproving God’s existence isn’t necessary. It is hardly necessary to dis-prove something that has never been proven in the first place.