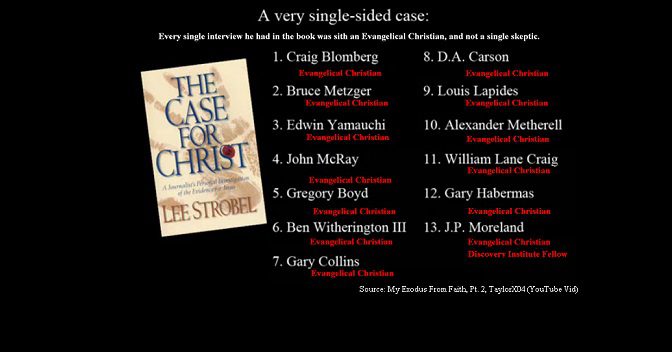 In 1998, Lee Strobel wrote a book called “The Case For Christ”.  In it he frequently states that he used a hard-headed, no-nonsense, skeptical approach to the question of Jesus’ resurrection during a time in his life when he was an atheist; but then he goes on to spend the entirety of the book interviewing Christian evangelists and ministers.  Not once did he stray from the pack of people who actively want to sell you belief (see Image Top).  He loads the deck in favor of his foregone conclusion.

Jeffery J. Lowders’ states in his article “the Rest of the Story (1999)”:  “Strobel did not interview any critics of Christian apologetics, even though he attacks such individuals in his book.  For example, Strobel devotes an entire chapter to his interview of Greg Boyd (an outspoken faultfinder of the Jesus Seminar), yet Strobel never interviewed a single member of the Jesus Seminar itself!  Likewise, he repeatedly criticizes Michael Martin, author of Case Against Christianity, but he never bothered to get Martin’s responses to those attacks. This hardly constitutes balanced reporting on Strobel’s part; indeed, on this basis, one is tempted to dismiss the entire book.”

Further, Scott Bidstrup, in his article “The Case Against ‘The Case for Christ’” takes exception to his claim that he was an atheist at the time he wrote the book.  “The book is very cleverly crafted. It is often claimed by the proponents of this book that the author wrote it when he was an atheist, and was undergoing the conversion process. This is not true. From a careful reading (see the last two paragraphs at the bottom of page 14), he makes it quite clear that he wrote it as a fully committed Christian, “retracing” his spiritual path an indeterminate period of time after the fact.  As such, it is yet another ordinary piece of apologetic axe-grinding.”

In addition to articles like Lowers’ and Bidstrup’s, there are many books that answer Strobel’s claims, and speak truth to his interviewees but “ATHEISM and the Case Against Christ” by Matthew S. McCormick actually re-creates the arguments against belief in the resurrection of Jesus from the ground up, addressing not only the facts of the claim but the conditions under which the legend of a resurrected Jesus was created and perpetuated throughout the ages.

McCormick takes the reader through the many and varied reasons why it is not reasonable to credit the story of the risen Christ including:

The author also points out that if Jesus of the bible were actually God on earth and we believed that the miracles that Jesus performed were actually miracles that an All-Powerful, Universe-creating God would have performed; then He would be the under-achiever of all times.  Walking on water?  Feeding people?  Healing the sick and appearing to raise the dead?  Please.  How about re-arranging the stars to spell “Jesus Is Christ” in every human language, past, present, and future?  How about eradicating hunger?   How about creating a Bible that would self-update to explain things that really need explaining; like germ theory, or Electromagnetic theory, or Gravity?  And explaining them in a way that we could readily understand and use to make our lives better?  Or how about coming down to earth to actually help us with our problems, and then doing it for every single generation?

McCormick asks the reader how much trust they would put in a doctor who based his medical decisions on data gathered by a nurse who believed that the patient’s problem was their diet, and supplied the doctor only with information that supported that diagnosis.  How much should a District Attorney trust a detective who is known to have a particular malice against a person that he is investigating?  You should not feel justified in any judgment that does not have evidence both pro and con represented.  Further, you should certainly not feel comfortable with your own judgments if they are only supported by Faith; that is, when you discount all evidence against your view (or when you never even seek it out, as in The Case For Christ book.)

Matthew McCormack goes on to say that “One problem with Faith … is that if the believer decides to ignore the insufficiency of the historical evidence for her view, then the criteria she would have had to sort between acceptable and unacceptable beliefs would be lost.  If the faithful believer deems the historical evidence to be irrelevant, then the floodgates would now be open for a long list of other religious and metaphysical views and the believer would have no grounds on which to decide what views would be worthy of believing.  If the historical facts do not matter, then Islam, Buddhism, Judaism, Mormonism, Zoroastrianism and thousands of other religions would all be on the same footing.  And that possible leveling of the decision field would undermine any special claim that Christianity might make on having the truth.”

To that point, at our Atheist MeetUps, I have long handed out cards imprinted with the tongue-in-cheek motto “Faith is Incredible!  With Faith you can believe anything!”  My point is the same as McCormack’s.  Without evidence and reason, you really can use Faith to believe that any religion, any conspiracy theory or indeed, any premise at all is true.  Every preacher of every sect of every religion in the world is telling his congregation that they must have Faith that what he is telling them is true.  And the time that he says this?  Why, it’s when they are questioning what he is telling them, of course.