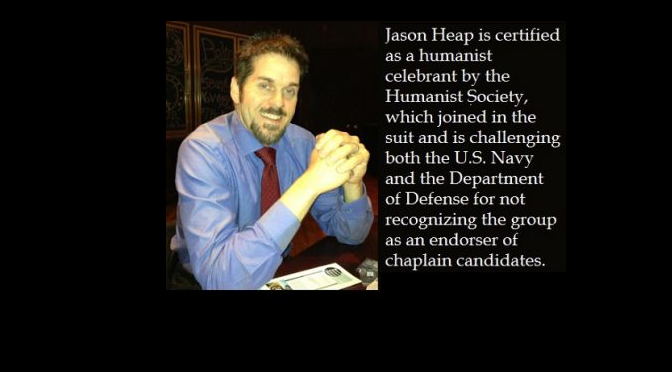 The number of atheists in the military is growing rapidly. A recent Christianity Today article says that “Atheists Outnumber Southern Baptists in US Military”, yet they have no secular counseling available to them outside of a Psychiatrists office.

“According the latest Department of Defense statistics on religion, there were 12,360 Southern Baptists among the US military’s 1.3 million members on active duty as of December 2014. There were also 12,764 atheists—an advantage of 404 over Southern Baptists.” – Bob Smietana, Christianity Today

Most-times when a believer hears of non-believers requesting a Secular Chaplaincy, they’re confused. Their first response is the old saw “There are no Atheists in Foxholes”; and with that they attempt to toss aside the whole issue. Then, they wonder why people who don’t have a religion would want a chaplain.

Well, believe it or not, there are some very good reasons. The most important reason is that if a “believer” has a personal life crisis, they can go to their Chaplain and discuss their problem with a person who is a government authorized aide.  One who is appointed to help that service member with personal, as well as religious problems. He is an officer who can access the chain of command to help bring about a solution to their problem which can be beneficial to the service and to the serviceman.  No mention of these visits are recorded in the serviceman’s personal record.

But if an Atheist or Secular Humanist requires counseling, they must go to the company psychiatrist. Psychiatrist visits are definitely put on their record, and can be read by future employers and police agencies as Trouble; a black mark on his record. Visit a Chaplin 50 times during a 4 year stint? No problem. Visit a Psychiatrist 50 times in 4 years. NOW it seems we have a reason not to hire this person, or to mention it in front of a jury.

Moreover, don’t forget that there are many reasons for counseling that have nothing to do with religion.  The service man, or woman, might just need to talk about a problem they’re having with a member of their family, or substance abuse; a financial problem, marital troubles, family housing, aging parents, emergency family communications, or finding resources during a particularly hard move; or maybe they’re having problems with the chain of command.  And don’t forget that Atheists have to deal with deaths in the family as well and there is little or no comfort to be had from a Chaplain that will tell them that they better turn or burn, as many will.

Also consider that if a non-believer, wary of the stigma of going to a psychiatrist, decides to go to a Military Chaplain of the religion that they were raised in, they may be (and probably will be) proselytized and pressured to return to that religion; never mind the reason he came in for counseling in the first place.

The Military Association of Atheists and Freethinkers are working to correct this deficiency. In 2014 Jason Heap, an atheist who applied to become the Military’s first humanist chaplain, was turned down by the U.S. Navy:  “MAAF is supporting the application of Humanist Society Celebrant Jason Heap for Navy Chaplaincy. View the recent interfaith sign-on letter in support of humanist chaplaincy.”

At this point the case is being appealed.

It can be argued that having the government pay Religious Chaplains in the military violate the first amendment’s separation of church and state clause. Han Zeiger at Pepperdine University says “No office in America is so delicately balanced between church and state as that of the military chaplain.” It is direct government support for those religions that the government says are valid religions.  It would be better to have an all-volunteer Chaplaincy and take that tax burden off of the US Population which is growing more and more secular every year. But even in that case, the government would still be in the position of choosing which religions should be represented in the military, and which should not; a clear violation of the government’s constitutionally mandated neutral role where religion is concerned.

It’s time to remove the stigma from counseling for non-believers.  It’s time to either give counseling support to ALL military members regardless of religious beliefs, or remove the Chaplaincy from the Military.  Barring the latter we need to ensure that we make fundamental counseling services equally availability for all military personnel; especially if we are to pay them from our tax dollars.