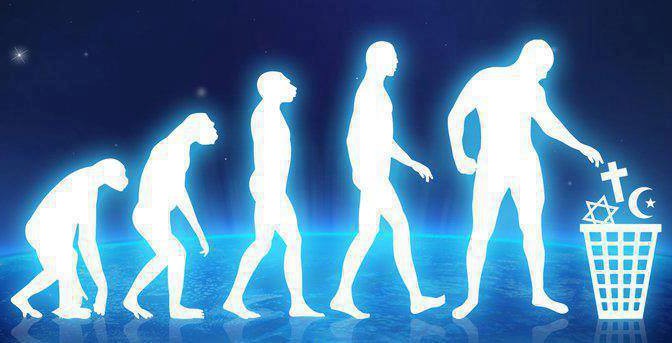 On our Freethought Forum TV show, we get all kinds of questions from our viewing audience, and some of the most troubling ones have been those pertaining to evolution.  It’s very distressing because it’s symptomatic of an educational system whose teachers who are not willing to spend time on the subject.

Sometimes it’s out of fear of complaints from creationist parents, or fear of disruption from children of who will interrupt teacher’s if/when they bring up this subject.  Even more disturbing is the fact that some science teachers themselves are creationists. They spend as little time on the subject as they are legally allowed to, and even then, teach it with a caveat: “The government makes me teach this, but I don’t believe it. God created all creatures the way they are now.” This effectively sends a message to the students that they really shouldn’t bother to try to understand the material.

So, in an effort clear up some of these misconceptions, I thought I’d address a column to the most common ones that we hear on the show.

A caller will call the show and ask “You believe in the Theory of Evolution, huh? You actually believe the Universe came from nothing?” First, we don’t “believe in” the theory in any religious sense.  We accept it as the best working theory of where we, and the great diversity of life on this planet, came from. “Believe in” is a religious concept that requires Faith. There is no need to use Faith to believe that the Theory of Evolution is true. There is plenty of evidence to support it. For more information on Evolution, click here.

Secondly, and more importantly, the origin of the universe is not addressed by the Theory of Evolution.  The study of the Universe falls under Physics, and begins with the beginning of time, space, matter and energy. This is the Big Bang, which occurs billions of years before the first organisms.

The study of Evolution falls under Biology, and does not begin until the first organisms exist.

The origins of the Universe is currently best explained by what is called the Big Bang theory, and even that doesn’t take us back to the actual instance that started the universe, nor to the prior conditions that brought it about. That is still unknown, and might be for some time to come. Why? Because the laws of Physics themselves break down as we approach the actual event. (It has recently been theorized that the Universe could have actually come from nothing. For further information on this, go to: The Universe from Nothing)

Next, when the caller does ask a question that is covered by the Theory of Evolution, they often get the concept wrong. They might ask, “I’ve never seen a dog turn into a cat.” I usually answer, “And you never will, that’s not how evolution works”. Dogs always give birth to dogs, and cats to cats. Dog and cats have a common ancestor (Carnivora) which, over millions of years, led to dogs and cats. Going farther back in time, there was one common ancestor to all mammals, which not only led to all dogs and cats, but to whales, horses and us. And if you go back far enough, there would be an organism which led to all life on earth.

They might ask, “If we came from monkeys, why are there still monkeys?” First, it’s not that we came from monkeys, as much as we descended through them (see above). As far as why monkeys are still around, it’s because there are still monkeys living in environments that support their current physiognomy, their physical makeup. If their environment changed then, over time, they would change as well. Environmental pressures change the organisms that live in them. Small environmental changes may change them very little or, in the case of major environmental changes, a lot. This is what happened in the case of hominids.  Our simian ancestors lived in an eastern African tropical forest. This lush forest was supported by the warm, moist air flowing down from the Asian continent. It brought the large amounts of rain necessary to support that tropical environment. Then, around 50 million years ago, that all started to change.

India, which was an Island at the time, moved northward due to plate-tectonics and collided with the main Asian continent creating a great mountain range, the Himalayas. (They continue to rise about a centimeter a year due the pressures still exerted by India.) The great height of the Himalayas interrupted the flow of this moist air from Asia and over time, reduced the lush green forest home of our ancestors into grasslands and savannahs. Our ape-like, pre-hominid ancestors then had to adapt to a different way of living. This change was hard for them as it forced them to spend more time standing on two-legs. It also forced them to utilize their ever-growing brains more and more, and this was to turn out to be their main advantage when competing with other animals in this new environment. Eventually they would make tools, hunt cooperatively and invent fire and clothing. Changes in the environment result in changes in the organism; in this case, the organisms were our forebears.

(On a side-note: There were several different competing hominid species who lived in Africa and Europe before Homo-Sapiens finally emerged as the sole survivor. Most of these species were not our direct ancestors and ended up just being a short branch on the evolutionary tree.)

Many times we hear people say “Well that’s all well and good, but only God can create a new kind (species) of animal, evolution does not explain that.” Actually, evolution explains it very well, due to the same environmental pressures that we talked about above.

There are two concepts that drive evolution: Random mutation and natural selection. Mutations can come from DNA replication errors, general environmental radiation, cosmic rays, etc. One only has to look at birth defects to see that mutations exist. Some mutations, like birth defects, are large and can keep the organism from surviving to an age which it can attract a mate and have offspring. More likely however, it is a small change that may give an advantage (or disadvantage) to that organism in relation to the environment in which it lives.

If a mutation represents an advantage, that is it gives the organism a better chance to survive, find a mate and have offspring, then they can pass on those genes to the next generation. However, if the mutation is a disadvantage (i.e. the organism is less likely to survive and/or mate in that environment) they will be less likely to pass those genes on to the next generation, and trait dies out. In our case, the monkey-like traits were not advantageous to living on the grass-lands, so the genes that drove those traits were eventually selected against, and died out in Homo-Sapiens.

In speciation, you may have a population of organisms that are split into two separate populations due to an earthquake, a continent dividing or a river diverting from its original path. Those populations will then continue to mutate and reproduce in their own particular environment. If the environments that they live in are sufficiently different (like the pre-human apes who had to adapt to grasslands versus the monkeys who were still living in tropical forests) the mutations will accumulate over time, and eventually you will end up with two groups that can no longer interbreed. At that point you have two separate species where there was originally one.

The above questions may be from viewers who ask them out of honest curiosity. However, there are dishonest fundamentalists who try to “debunk” evolution through the use of logical fallacies, and they depend on the audiences’ ignorance.

In the particular case of Kirk Cameron and Ray Comfort and their “crock-a-duck” bunk, they know better. They have been told repeatedly that that’s not how evolution works. However, as they continue to push their ideas on unsuspecting audiences, it can be seen that they are practicing intentional deception, i.e. lying. They are breaking what they must consider to be a commandment in order to discredit the Theory of Evolution, preserve the beliefs of their audience, and make money.

Once you understand how evolution through natural selection works, you are no longer likely to fall victim to their creationist nonsense.

Knowledge is power, and with the internet, school is always in session.