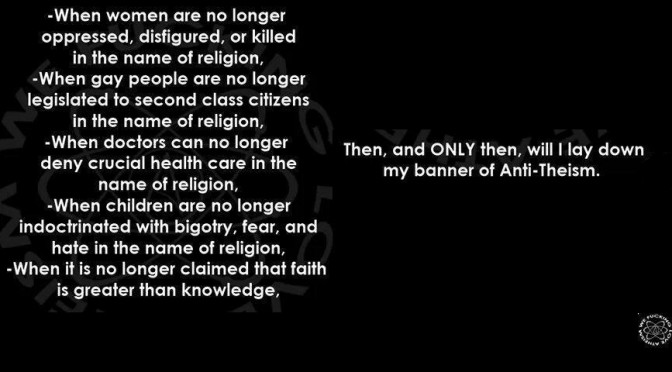 I’m on Facebook a lot, and I notice that whenever atheists point out inconsistencies, or fallacies in religious thought, Christians (and believers of other religions) will ask the atheist: “You don’t even believe in God, why do you care what we believe? ” They say, “It’s none of your business what we believe; it’s a personal and private matter.”

But that’s not really the case, is it?

Religious people never seem to shy away from expressing their “personal and private” beliefs publicly, and at every opportunity. They put their “God” on the money that we all have to use, they buy bill-board space to very pointedly tell us that we can either believe in God, or get out of “their” country. They feel positively compelled to push their religion down the throat of every non-believer (and different-believer) that they happen across. They even go as far as coming to our doors; or screaming at us through bull-horns as we walk along the street, in order to share their “personal and private” beliefs with us, to “witness” to us. To them, the beliefs of others are not important, but their’s are all-important.

The practitioners of these religions, far from being satisfied with privately practicing their beliefs, actually get their congressional representatives to pass laws that make everyone else live under the strictures of their religions.  Gay marriage for instance, is forbidden in Christianity; but are they satisfied with simply not practicing gay marriage?  No, they have to make it illegal for everyone, whether they share their religious beliefs or not.

Christians also attempt to suppress the teaching of any science that does not support their belief system. Given half a chance, they would outlaw the teaching of evolution (as that has been their position historically).  No matter that it is the back-bone of modern medicine, and taught in every accredited school of higher learning on the planet.

The previous Pope himself said that we should not investigate the early universe as “That belongs in the domain of God.”  That Pope is also directly responsible for thousands of deaths in N. Africa where he announced that condom use actually helps to spread the AIDS virus; thereby discouraging condom use on that aids-ridden continent.

When it comes to spreading their beliefs, they don’t even hesitate to break the law. They illegally bring boxes of Bibles, and religious tracts, to schools to give to our children; propaganda which tells them that they, and their non-believing parents, are going to go to Hell and burn forever, and which also say that unruly children should be stoned to death.  Religious leaders know that when this information is given to children in the school setting, it appears to come with the authority of the Government Education system, and therefore carries much more weight in the eyes of these impressionable kids.

Christian teachers then try to lead Christian prayers in our children’s classes.  This is an unconstitutional endorsement of religion by government; but do they care?  No, they have no qualms about disrespecting the beliefs, or non-beliefs, of others as long as they get to promote their belief system. The more non-believers they discomfit, the better.

Christians pass laws based on those bibles which make women second-class citizens in their own country; and attempt to limit their reproductive rights.  The misogyny of the world’s holy books teach that women have half the value of a man, should stay quiet and tend the home, and not seek careers for themselves.  Some religious countries even keep women from getting an education, voting or driving cars.  They teach that women “provoke” their own rapes; that they are more responsible for a sexual attack than the man.  Some of these theocracies will even stone the raped woman to death for the crime of adultery!

The worst part of this are the Religious Fundamentalist Terrorists.  These are the people not only blindly follow the letter of their barbaric religious teachings to the letter, but who cannot allow other, more progressive citizens, to live their own lives.  And we’re not just talking about Muslim terrorists here; but Christian terrorists as well (Examples include Northern Ireland Terrorists, the Army of God, the KKK, abortion Clinic bombers and the missionary-taught African Homophobes and witch-hunters.)  The very reason that we have to suffer through the long lines of security in airports and courthouses can be directly laid at the feet of these people.

All of this above does not even address the hardships and downright atrocities that the children of some of these religious believers have to suffer through: faith healing instead of real medicine, the crippling discipline and severe punishments based on not ‘sparing the rod”; the mental cruelty and severe restrictions placed on their education due to religious home-schooling, and the mental anguish suffered as a result of telling them that any non-Christian friends they may have will be tortured forever in Hell.

When Religion shared power and control with Government (the Dark Ages) we had a thousand years of intolerance, blood-shed, and oppression.  We cannot; we will not, stand aside and let that happen again.  The time when atheists will sit down and shut up is over.

The dialog has been joined.  Let us all get involved.

(For more information about why Atheist are angry, and will no longer be quiet about it, please read Greta Christina’s Blog post on “Atheists and Anger”.)