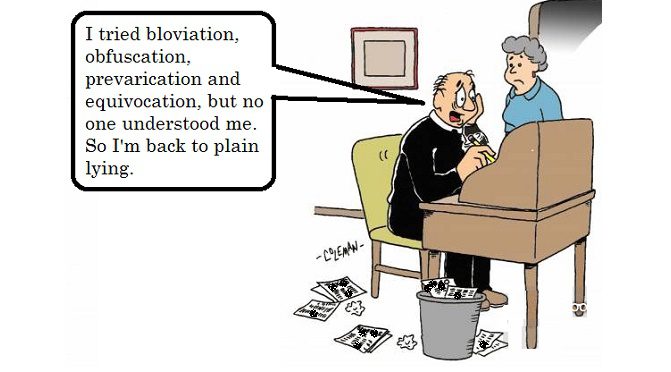 It was recently presented to me that Jesus didn’t mean that you could literally toss a mountain into the sea using Faith, even though that’s what it said in Matthew and Mark,.  It was further submitted that this Faith mentioned by Jesus is not the Religious Faith that we speak of today, i.e. Blind Faith, or believing without evidence.  In support of this contention they shared a video by a Christian Apologist named Greg Kouki.   Greg Kouki says in his video that Faith is not “Religious Faith” or “Blind Faith” as the layman understands it; but it is actually Trust, based on Knowledge that comes from Evidence, and the evidence he sites comes in the shape of a burning bush, staffs turning into snakes and biblical plagues, etc.

It is typical of Christian Apologetics to obfuscate what is plainly written in the Bible.  You read a passage and like the vast majority of Christians throughout the world (including Preachers of the gospels) and you absorb what it plainly says.  Then when you question it’s validity, or say that it is evil, an apologist will pop up and says “Oh, it doesn’t mean that,  it means this..”  Then they give you 12 articles, 2 books and a video to help convince you that it doesn’t really mean that awful thing.  “It doesn’t mean that,  it really means (insert his new meaning here), and you can see that it isn’t evil; it’s actually neutral, or even beneficial!”

However, billions of people the world over understand that they must exercise Faith to get into heaven.  And the Faith that they use IS “Religious Faith” or “Blind Faith”.  Indeed, when believers are actively questioning their religious teachings, their preacher will often tell them (after he has gone through his usual arguments) that they just need to have Faith in the Biblical teachings, Trust in God and hope for the best.  And he’s NOT saying that they have to have “Trust based on Knowledge earned by Evidence” as Greg Kouki would have us think.

Jesus said, “Truly I tell you, if you have faith and do not doubt, not only can you do what was done to the fig tree, but also you can say to this mountain, ‘Go, throw yourself into the sea,’ and it will be done.”  Do the apologists really expect me to believe that he didn’t mean that a mountain would actually, physically move when it plainly says that?  Consider that this passage is in a book that routinely places miracles at our feet and asks us to marvel at them?  Greg (and other apologists) would have us believe that when the person who routinely violates natural laws tells us that we can too, we shouldn’t read it literally?

Even if Greg Kouki had convinced us of his premise, that would change what Jesus said to “Truly I tell you, if you have Trust, based on Knowledge gained by Evidence, and do not doubt, not only can you do what was done to the fig tree, but also you can say to this mountain, ‘Go, throw yourself into the sea,’ and it will be done.”   You know that he Mountain would still not move.  Further, it is fairly apparent that the whole meaning behind Jesus’ words is not “Have faith and you can do wondrous things”.  It is “Do not doubt.” i.e. Exercise Religious Faith as we know it today; i.e. don’t question what I (or my proxies) tell you, just accept it.

Another example of apologetics trying to twist what the bible actually says to something more palatable is when God tells Adam that if he eats from the fruit he will die.  I quote Genesis 2:16-17 “The LORD God commanded the man, saying, “From any tree of the garden you may eat freely; but from the tree of the knowledge of good and evil you shall not eat, for in the day that you eat from it you will surely die.”

What could be more plain? It’s a death-threat for disobedience.  Eat it and die, immediately.  But since they ate it and didn’t’ die it means that God lied to them. However apologists can’t have that.  So they make up this story about “spiritual dying”.   The Bible does not say anything about spiritual dying in the story.  The words are plain, but we are told “Sure it says that, but it didn’t mean that…”

Other apologists say, “Well, they did die eventually. If they hadn’t eaten of the fruit they would have lived forever.  That’s what He meant.“  However, the God said plainly says in that passage that they would die in the day that they eat from it.  And in Genesis 3:22 “Then the LORD God said, “Behold, the man has become like one of Us, knowing good and evil; and now, he might stretch out his hand, and take also from the tree of life, and eat, and live forever”.  That contradicts what the apologists would have us believe in lieu of what it plainly says.  At the time they ate the fruit, they weren’t going to live forever.

The Bible says what it says, and you have to address that. Apologists and biblical scholars have a thorough understanding of the text of the bible and a lofty education on the nuances of the passages from many difference sources; but those nuances are not stated in the Bible and they are not (with rare exceptions) being taught from the pulpit.  Faith, to the average pew sitter means believing without evidence (or indeed, in the face of contrary evidence), and no amount of apologetics will change that.  We have to address the word as it is understood by the average Christian.   Allow no equivocation.