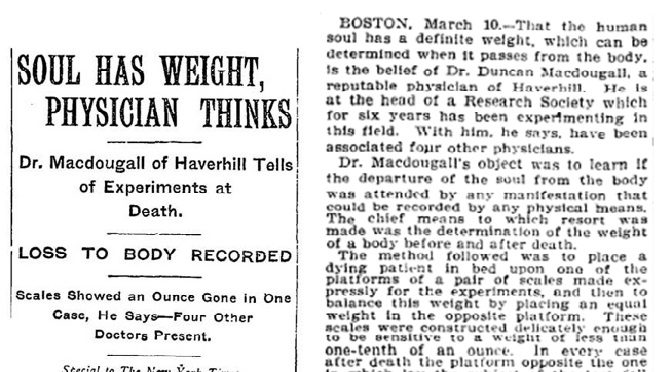 I see conversations on the internet all the time between believers and non-believers, who argue about God, the afterlife, Heaven and Hell, and so forth; but all of those arguments, acknowledged or not, hinge on the existence of a human soul.  Never mind proving God’s existence (and THAT conversation could go on forever), let’s just talk about the soul for a minute.

Nobody has ever proven that a “soul” exists; and they have been trying for a very long time.  Back in 1901, Dr. Duncan MacDougall, did a famous experiment of weighing bodies that were at the point of death; and then claiming to have shown that when the soul leaves the body, the weight of the body diminishes by something like 21 grams.   Ok then, lets’ look at the facts about that particular experiment.

Such a procedure would raise some rather interesting legal and ethical questions about experimenting on humans at such a critical point in their life.  Dr. MacDougall did not exactly have thousands of people to work with.  Finding volunteers that would be willing to lie on a scale until such time as they died, not knowing how long that might actually take, would be quite an obstacle in itself.  However, this particular Doctor is said to have accomplished that much, at least, on 6 patients.

Valid medical experiments require a large sample size so that any anomalies could be thrown out and the aggregate could still be used to prove or disprove the hypothesis.  However, with a sample size of 6 people, one could not really expect conclusive results.

Not only did he start with only 6 people in his experiment, but he discarded 2 of them.  Of those two cases he said of one “our scales were not finely adjusted and there was a good deal of interference by people opposed to our work.”, and of the other “My sixth and last case was not a fair test. The patient died almost within five minutes after being placed upon the bed and died while I was adjusting the beam.”

Conclusive?  Hardly.  Not only did the doctor admit up front that “our scales were not finely adjusted’, it is quite possible that this tiny bit of weight loss from a full sized man (especially after a bit of time) could be accounted for by evaporation of fluids from the epidermis.

Not only was it a very ineffective medical experiment, but it was never repeated. Being able to repeat an experiment is crucial to the scientific process.  If you can’t get the results from a separate experiment, then the foundation of the premise has to be discarded, and you simply should not use that experiment as a basis for claiming the hypothesis as a fact. Yet people use THIS particular example all the time, and claim it as “scientific proof” of the existence of the soul. However, in order to accept this as proof, one would also have to prove that

1) That souls themselves exist (never proven)

2) They actually have weight (pure conjecture)

3) The weight lost, if it occurred, was from the loss of a “soul” and not something else

Let’s take this one step further and just for the sake of argument, say that we DID accept this as proof that souls exist and have weight.  In order to use this as a confirmation of Christian Religious claims, Christianity would still have to prove:

5) That souls can, and do, contain our mind, memories and identity and are independent of the brain.

6) That souls survive the death of our bodies intact.

7) That they will continue to live on for an eternity.

8)  That there are places for the soul to go after death.

9) That the specific places: Heaven and Hell actually exist.  (Each one would have to be separately proven.)

10) That they actually go to Heaven or Hell, and not some OTHER god’s version of an afterlife.

Notice that ALL of the above are simple religious assertions; and none of them have any evidence to support them.  It is far more likely that Dr. MacDougall was experiencing confirmation bias and seeing the results that his religious background demanded that he see.

I have also heard the argument that “Of course souls exist, you can neither create nor destroy matter or energy.  Your body has energy, and when you die, that energy has to go somewhere.”  I agree, but it doesn’t have to contain your intelligence, personality and memories intact.  It can simply be heat energy, and that energy can simply dissipate; like a candle going out, or a TV shorting out.

You never hear the argument that a candle has a soul.  It has energy, sure, but when it goes out, the energy simply radiates into the surroundings.  A dog also has energy, does it have a soul?  A television screen has an image, but you don’t wonder where the image spends eternity when the TV is turned off; it simply dissolves.  It’s the same with the energy of the body; its energy comes from chemical reactions that are fueled by the foods you eat.  When you die, it is because your system is broken (from diseases, injury or aging) and the energy that was present in it simply radiates, in the form of heat, into the surroundings.

It would be great if we thought we could live forever, but it’s simply illogical to think that we possess something that has never been found in any of our bodies after millions of autopsies have been performed on them throughout history.   Calling the energy of your body “a soul” is simply a way of side-stepping the problem and asserting something that has never been demonstrated to be true.  The premise of living forever has to be called what it is:  wishful thinking.