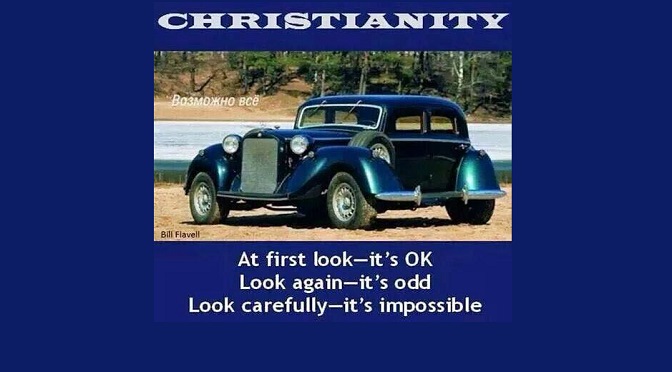 It’s funny that whenever I tell a believer that I’m an atheist, they always start asking me questions. I don’t really mind, I realize that I might very well be the first atheist that they’ve ever met, and I’m happy to put to rest some of the church-given notions about us. However, what continues to amaze me, is that these questioners who are VERY happy to question my beliefs, so rarely question their own.

With that in mind, I have drawn up several questions that I would like Christians to ponder. And it’s not for my own edification that I ask them, but for theirs. I hope that if they honestly consider these questions, they might realize for themselves just how much of their own skepticism and rationality they have been sidelining.

So, let’s get started:

Is it just because your parents told you that it was true? And that most of the people you know think that it is true? Really, think about it, what real, extra-biblical basis do you have to believe it is the work of a God?

Moreover, why did God put the Tree-of-Knowledge in the Garden of Eden in the first place? Especially if He knew what was going to happen? Isn’t He supposed to know everything that will ever happen? It would have been so easy just to place it on the other side of the world; or on the Moon for that matter. Why does it seem that He was just setting a trap for humanity?

Which is worse, Hitler killing 8,000,000 people (Jews, homosexuals, atheists, gypsies, etc.) or God keeping hundreds of millions of people alive just to torture them for eternity, some simply for not believing in Him, or even a particular version of Him? According to the teachings of Christianity, all of the Jews that Hitler tortured and killed were then promptly sent to hell for not believing that Christ was the savior; and according to the Bible, these are God’s chosen people!

Also, in a court of law, if you know about a crime that is about to be committed, and don’t try to report or prevent it, you’re considered an accessory to that crime. That would mean that God and Jesus, who know everything that is about to happen, are accessories to every child-murder, rape or kidnapping that happens anywhere on the planet.

From If God is dead, is everything permitted? By Elizabeth Anderson

“Kant advances a moral criterion for judging the authenticity of any supposed revelation. If you hear a voice, or some testimony purportedly revealing god’s word, and it tells you to do something you know is wrong, don’t believe that it’s really god telling you to do these things.

“I believe that Kant correctly identified the maximum permissible moral limits of belief in extraordinary evidence concerning god. These limits require that we reject the literal truth of the bible.  My colleague James Tappenden argues that such a liberal approach to faith is theologically incoherent. Perhaps it is. Still, given a choice between grave moral error and theological muddle, I recommend theological muddle every time.

She is in essence saying, If you receive a thought that you believe to be from God, judge it for its moral worth. If it’s not good, then it’s not from god. (Remember to believers, God is not the only supernatural being that has this telepathic ability.) Doing this shows that our own morals prevail over a “revelation” from a supposed deity. And if we judge the Bible by these criteria, it would be shown that major portions of the Bible have to be rejected as the passages could not be from a good God. How much of the Bible would we have to throw out then?

If so, you might as well turn off your computer and TV. Park your car and throw away your cell phone. Modern society would soon crumble into dust. The entire world would revert to medieval times (or before). Doctors would no longer have colleges to go to, scientific research would grind to a halt, all production but food and clothing would stop, and all other training would end.

Please, consider these questions honestly. Then, if any of your answers still involve supernatural beings, or where your “soul” will spend eternity, refer to Chapter 4.

6 thoughts on “22 Questions for Christians”