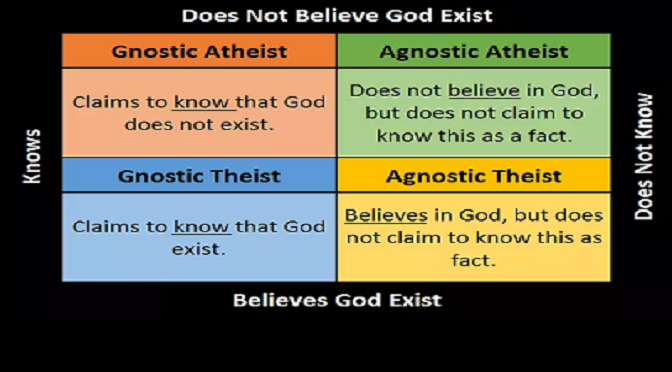 This is one of the most common questions we receive on Freethought Forum (a public access TV show that I co-host.) Most people mistakenly think that an agnostic is a person halfway between a believer and a non-believer; i.e. that they are not sure whether they believe in a god or not?  That’s not the case. Gnosticism doesn’t address beliefs. It addresses knowledge, or claimed knowledge. This is the definition that the Austin-Atheists use, and I concur.

* Gnosticism speaks to knowledge: Gnostics claim to have knowledge of a god, agnostics don’t.

You can be both at the same time. Personally, I’m an agnostic atheist, and most atheists are. We can’t KNOW for certain that there are no gods, of any type, anywhere, but we don’t BELIEVE in any.

* Hard (Gnostic) Atheists – People who claim that they know that a god does not exist, and can prove it through logical argument.

* Soft (Agnostic) Atheists – Claim that they don’t know (and indeed CAN’T know), and can’t prove it, but don’t believe in a god just the same.

Just as there are:

* Hard (Gnostic) Theists – Claim that they know that gods do not exist, and can prove it through logical argument.

* Soft (Agnostic) Theists – Claim that they don’t know (and indeed CAN’T know), and can’t prove that a god exist, but DO believe in a god just the same.

However, if you look up “atheist” in certain dictionaries you might encounter phrases like “one who denies the existence of God” (implying that we are in denial of reality), infidel, non-believer, immoral, or evil. After all, even dictionary compilers are human and subject to the same biases as regular authors. Good examples of this can be found in the older versions of Webster’s Dictionary. Webster was a Christian (theist) and obviously had an ax to grind against atheists.